“Just tell him you’re Ralph Mitchell’s granddaughter,”  my dad, Allan Mitchell, urged.  Billy Graham was going to speak in chapel at Wheaton College, where I was a junior in 1976.

“Oh Dad,”  I rolled my eyes.  I didn’t think that would mean anything to ‘Uncle Billy,’ as he was lovingly called in our home.

The following day, dutiful daughter that I was, I got into the receiving line after the chapel service, to greet Billy Graham.

“I’m Ralph Mitchell’s granddaughter, Jill,”  I introduced myself.  His face exploded into a sincere smile.

Dad was right.  Billy did know my grandfather. 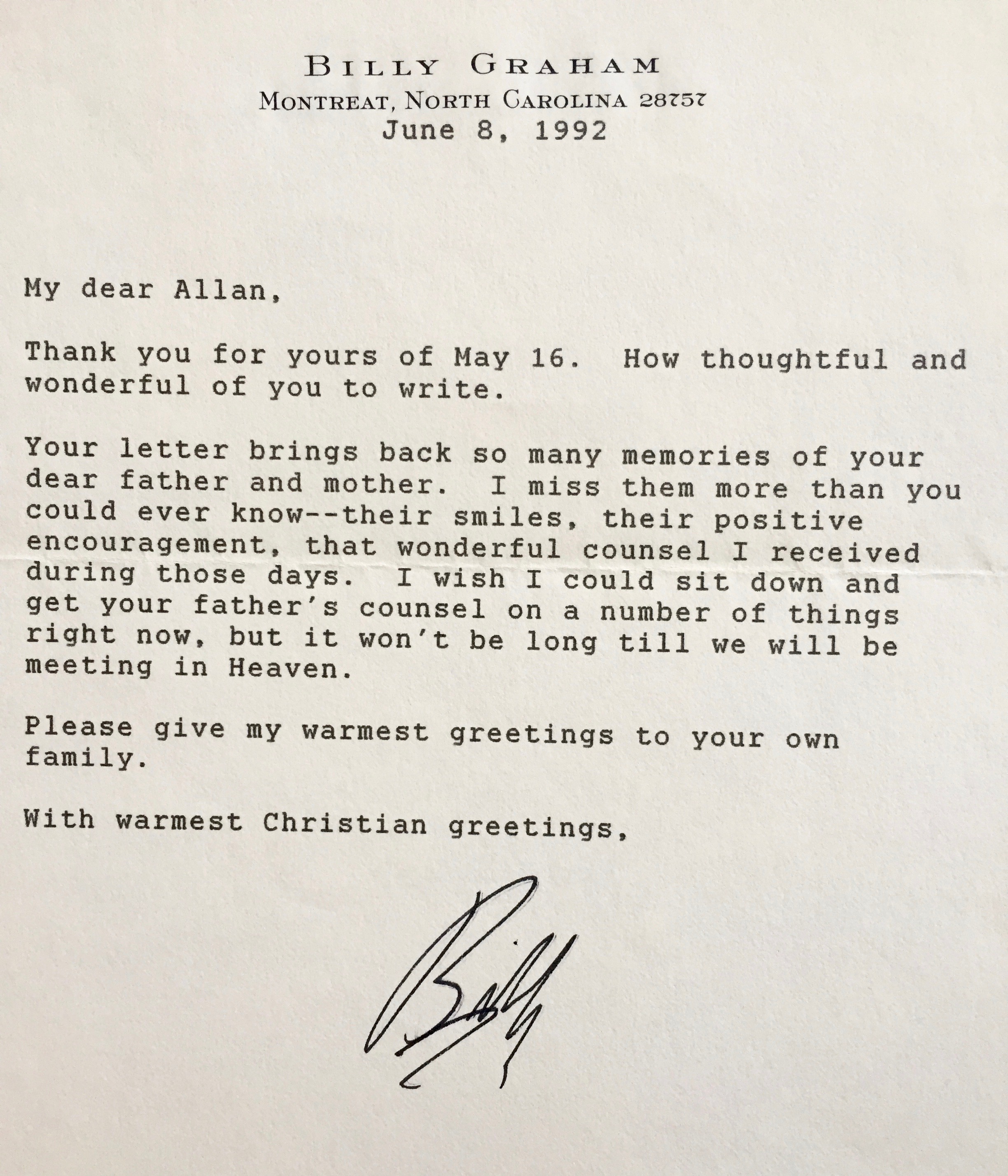 Ralph Wylie Allan Mitchell, we called him “Pawpaw,” was born September 10, 1898, at 4 Bruce Street, Dumbarton, Scotland.  He left school at 15 to work in Denny’s Shipyard on the River Leven, a few blocks away.   Herbert Wilson, a fellow shipyard worker, held a Bible class at the Railway Mission.   He heard the Gospel and was born again.

“Do you know the first thing he said after he was converted? ‘I want to win my friends.’  He asked God to give him a hundred souls…he always kept that compassion and zeal to see others brought to Christ; and within a day or two he had already won three of his close buddies to Christ.”  – Billy Graham

Ralph married Lily Sutherland Wilson, the daughter of the man who brought him to Christ.  On the Marriage Register, December 20, 1923, under ‘Profession’, is written, ‘Evangelist.’

They had two children; my father, Ralph Wilson Allan Mitchell, in 1925, and Ruth, born in 1931.  Being Scottish was something Pawpaw never let anyone forget.  Dad and his sister, look handsome in their kilts. 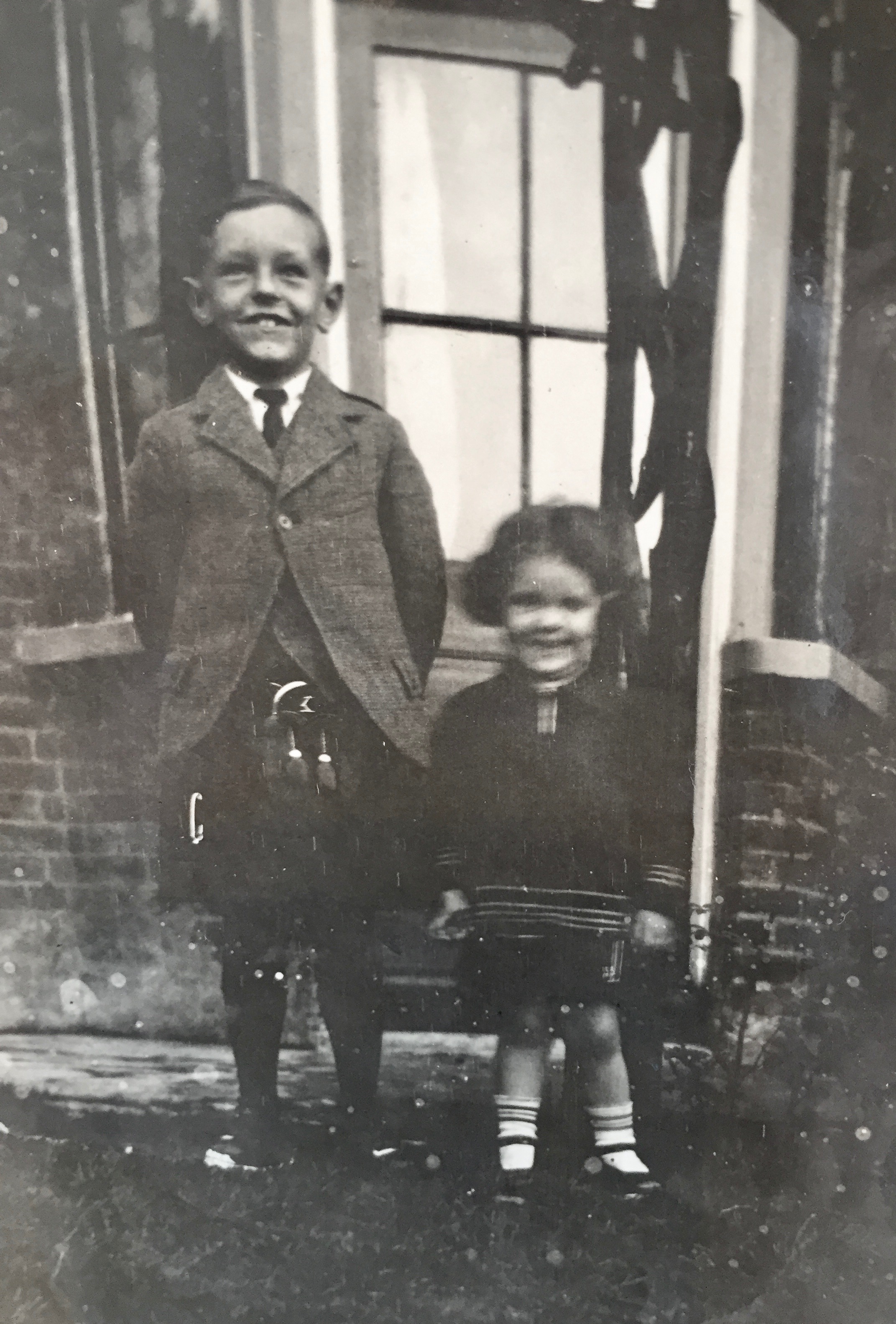 After graduating from Spurgeon’s College in London, Pawpaw pastored churches in London and Birmingham, England.  In 1934, Durham Road Baptist Church in Newcastle on Tyne, a large church in northern England, called him as pastor.  He said yes.  Pawpaw, in clerical collar, standing beside Sir Angus Watson, Member of Parliament for the area, and George Raw, a mining executive.  Pawpaw knew everyone. 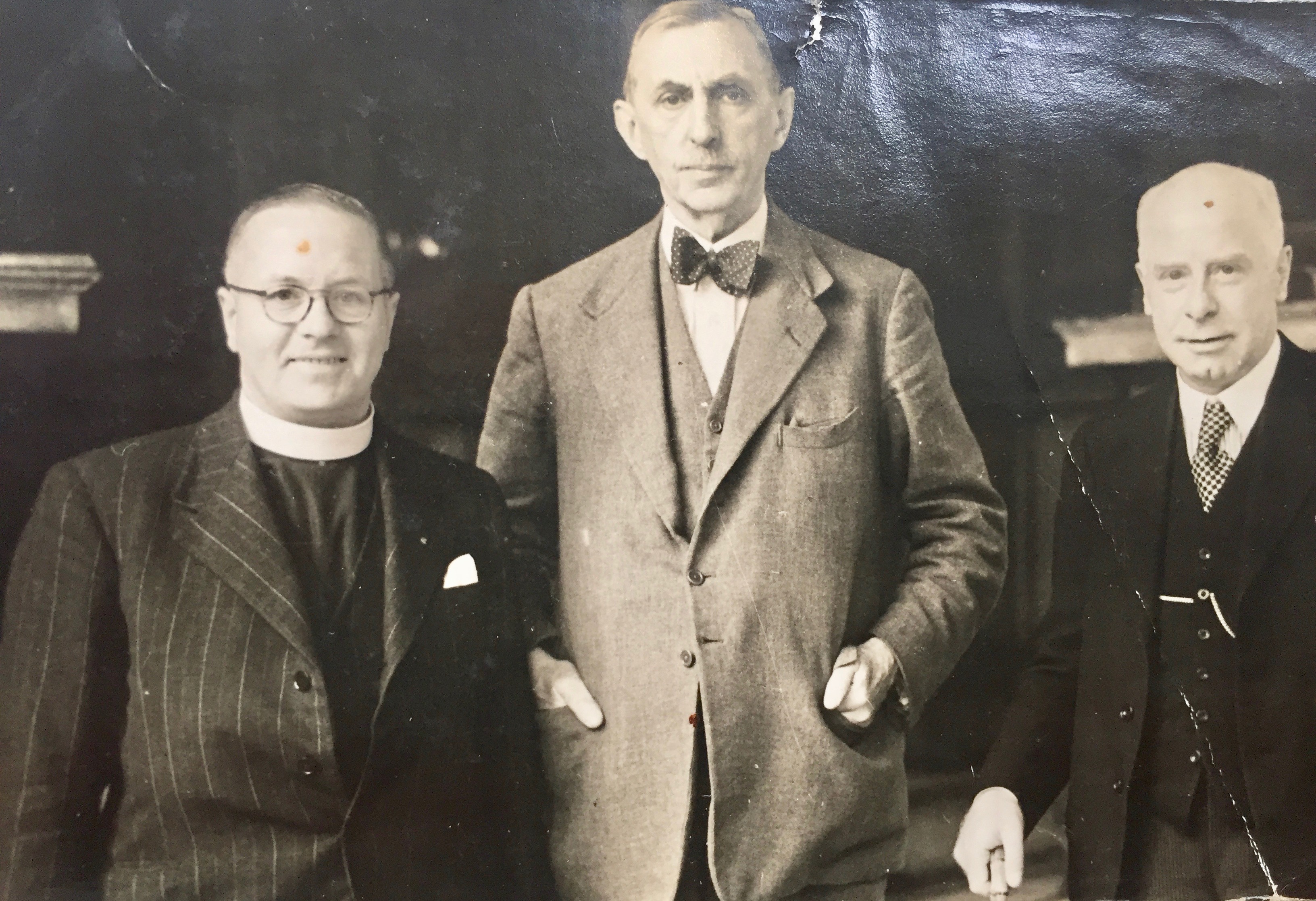 When I was in sixth grade, my teacher Mr. McGarry called me to his desk.

I looked at him, not knowing whether it was a compliment or not.  I didn’t know what “aggressive” meant.  I looked it up in the dictionary.

That was my grandfather, too.

At  football (soccer) games in jam packed stadiums, he taught Dad a special skill: how to make your way through a crowd.

“Push with your body,”  he advised Dad, after a game, squeezed into a mob.

They both pushed.  The gentleman in front of them turned back with fury.

Pawpaw immediately turned his head to the people behind him.

“Who’s pushing back there?!”  he cried out, then whispered to Dad, as they moved forward, “That’s how to do it.”

He was unafraid to take the actions that faith in God demands.  When Billy Graham, an unknown evangelist, came to England in 1946 scrounging for places to hold YFC crusades, Pawpaw led his church in hosting Billy at the City Auditorium in Newcastle.

“Well, until the first service he didn’t know what kind of evangelist this would be.  He didn’t know if we would stand on our heads – as he had heard American Evangelists would do, or what we would do.  But he had taken a chance because in prayer he had felt that this was of God.” – Billy Graham. 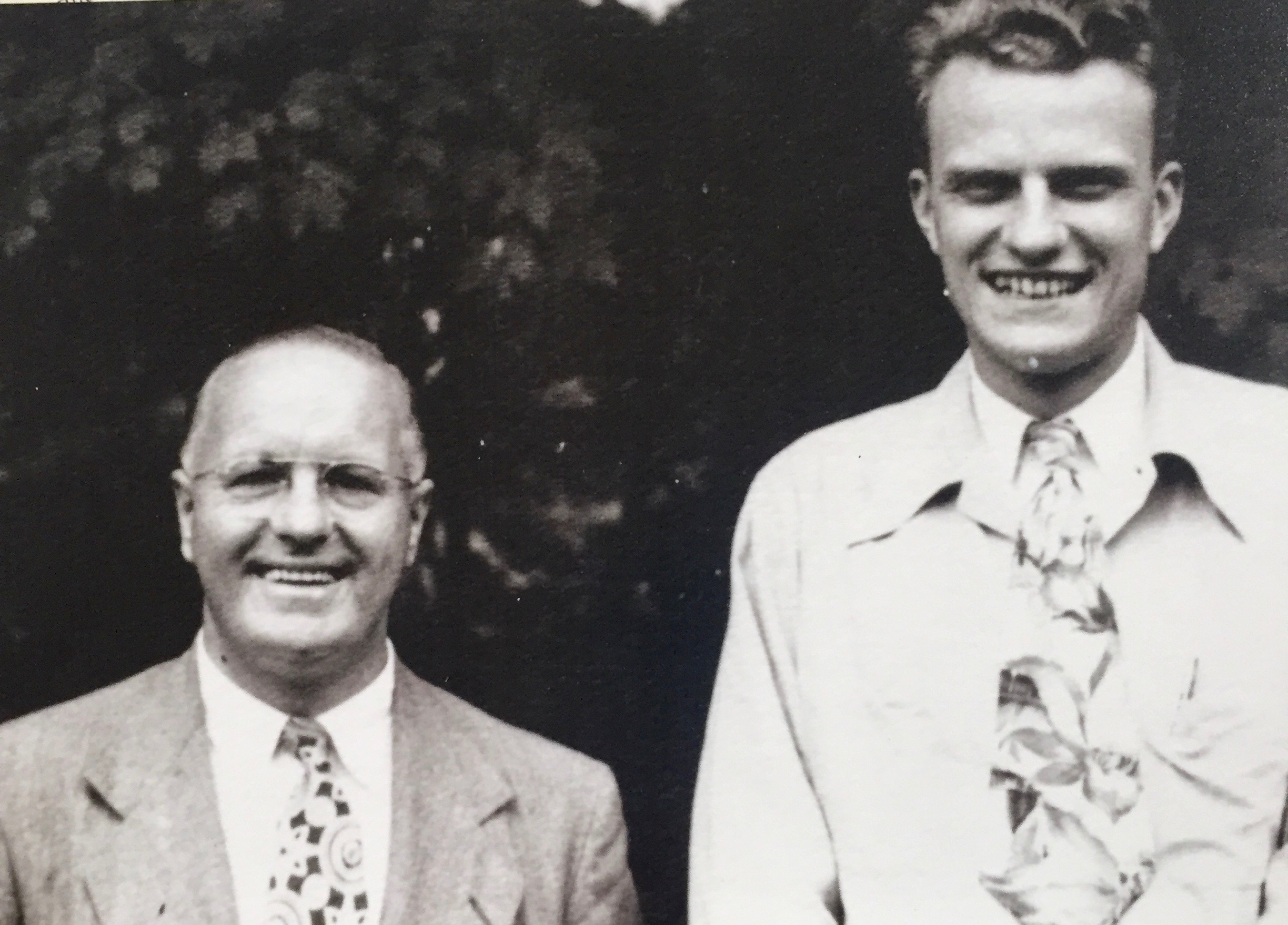 They were both eager to see God work and ready to do whatever it took to make it happen. 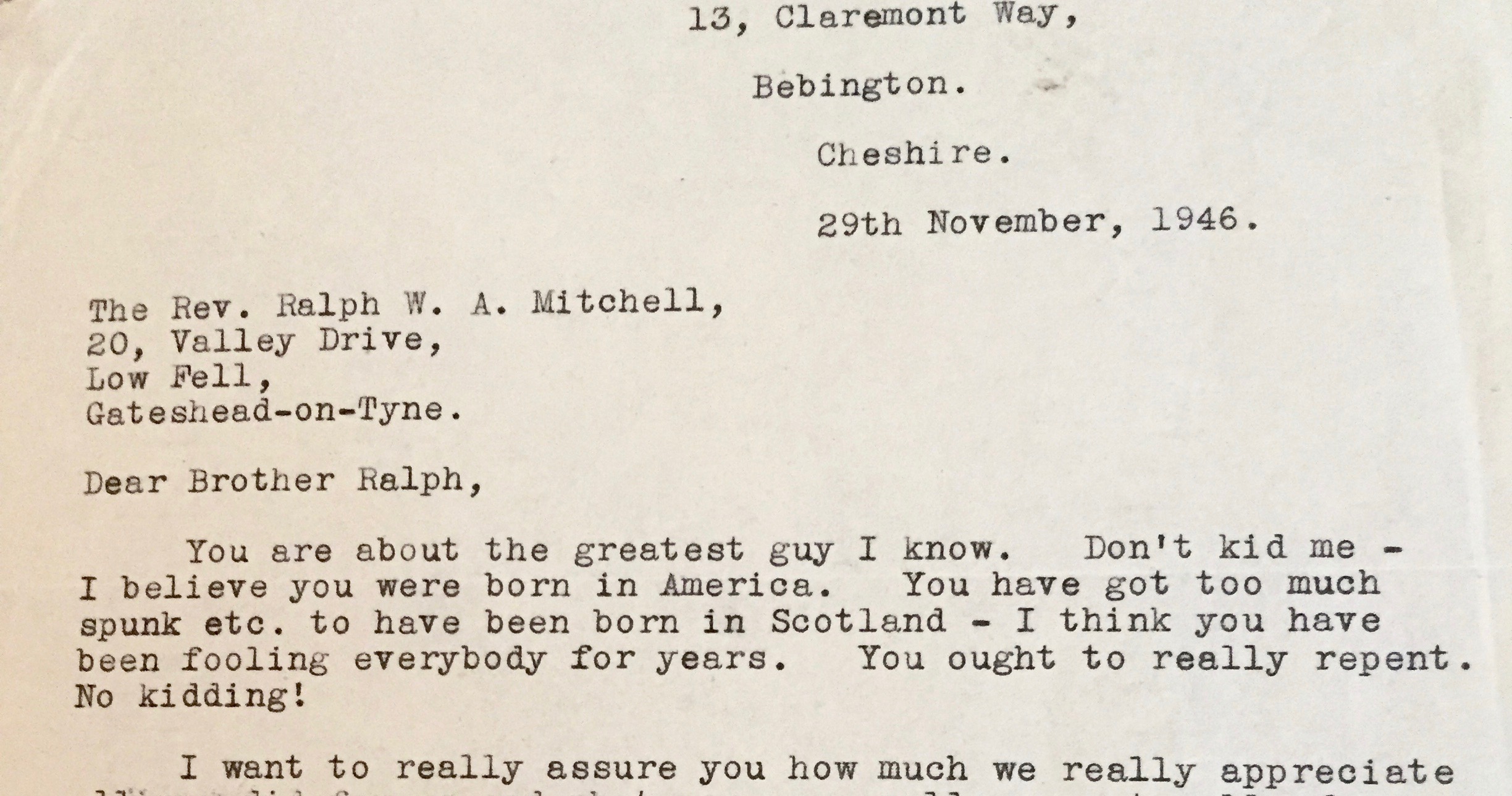 When Billy said, “Ralph, you should come to America,”  Pawpaw did, bringing his family with him, on the S.S. Queen Mary in April 1947. 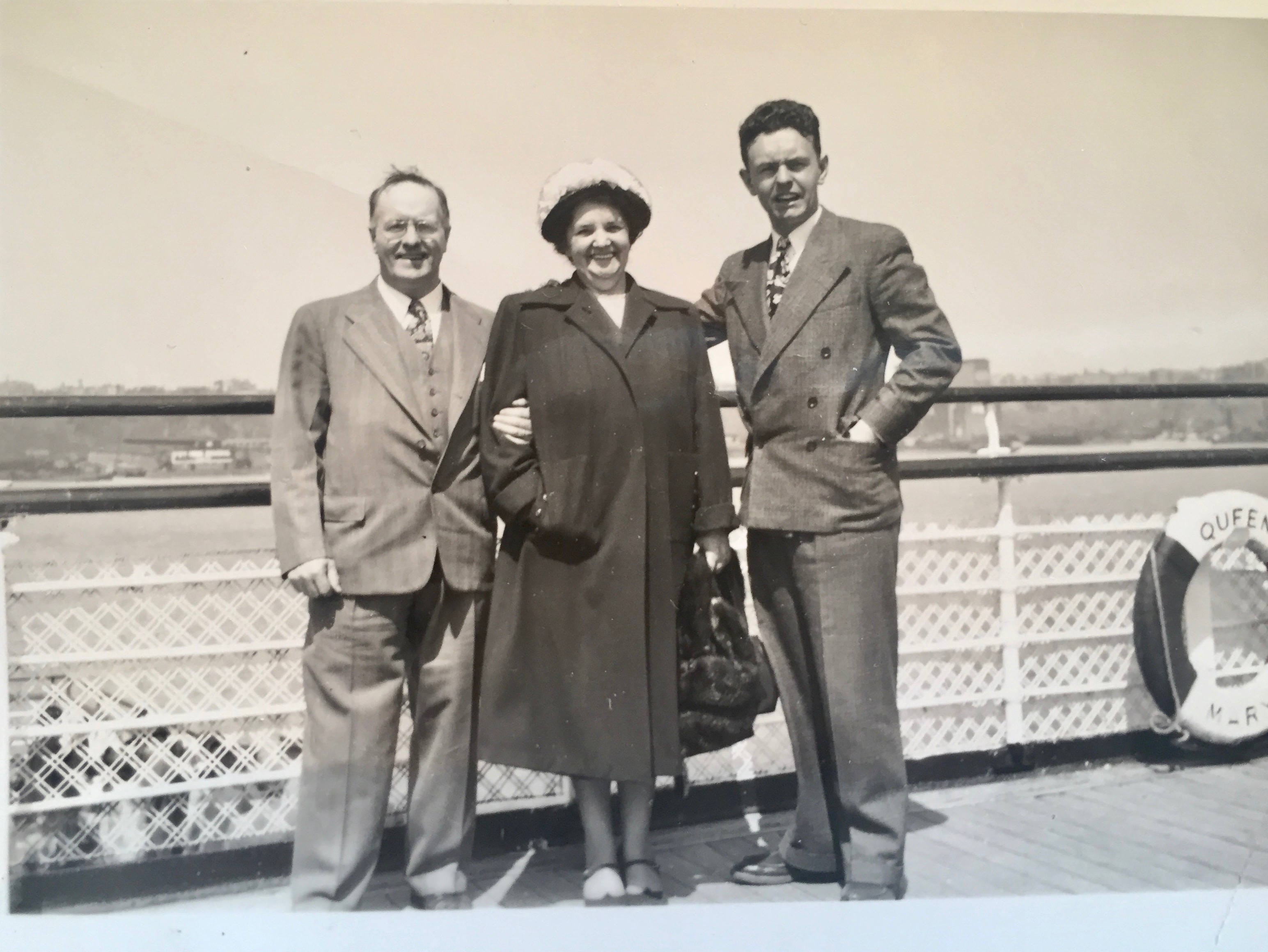 Dad’s ‘sis Ruth’ took this picture.  She planned to go to Wheaton College, because that’s where Billy Graham went.  Dad was engaged to be married to Sheila, a girl he had met while serving in the Royal Marines during the War.  Pawpaw said that was over.  He wanted Dad to come to America.  Dad did.

What did Pawpaw  do when he came to America? 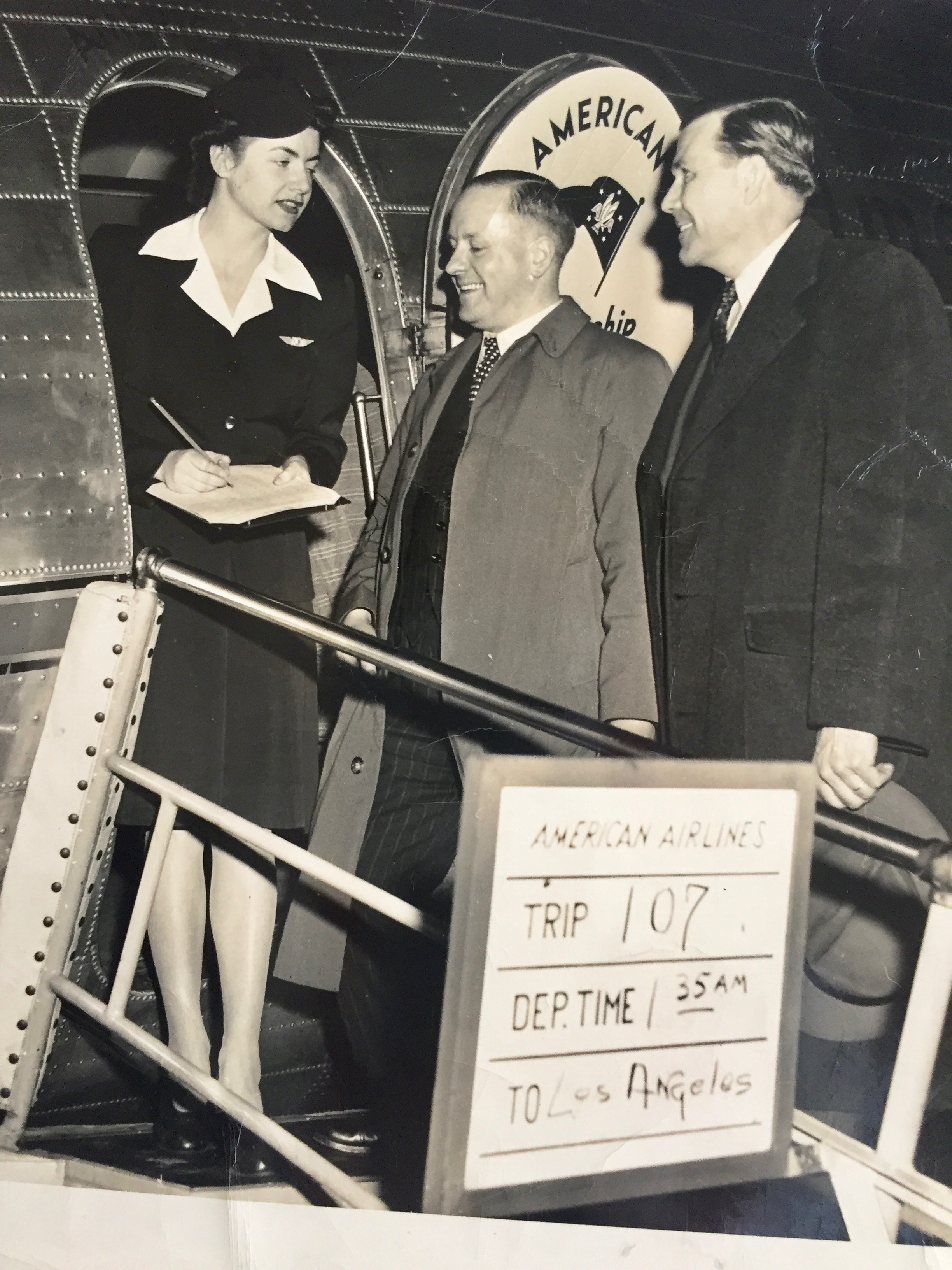 He preached at Bible conferences and churches.  He served with Pocket Testament League.  He worked on behalf of the Billy Graham Evangelistic Association.  He and Lily attended Crusades.  My sister Wendy with them to the New York Crusade in 1957 when she was four years old.  Before the Crusades, he prayed, shared messages and planned at BGEA retreats.  At one Crusade, when he went into a bathroom in the stadium, he found it so dirty he cleaned the toilets. 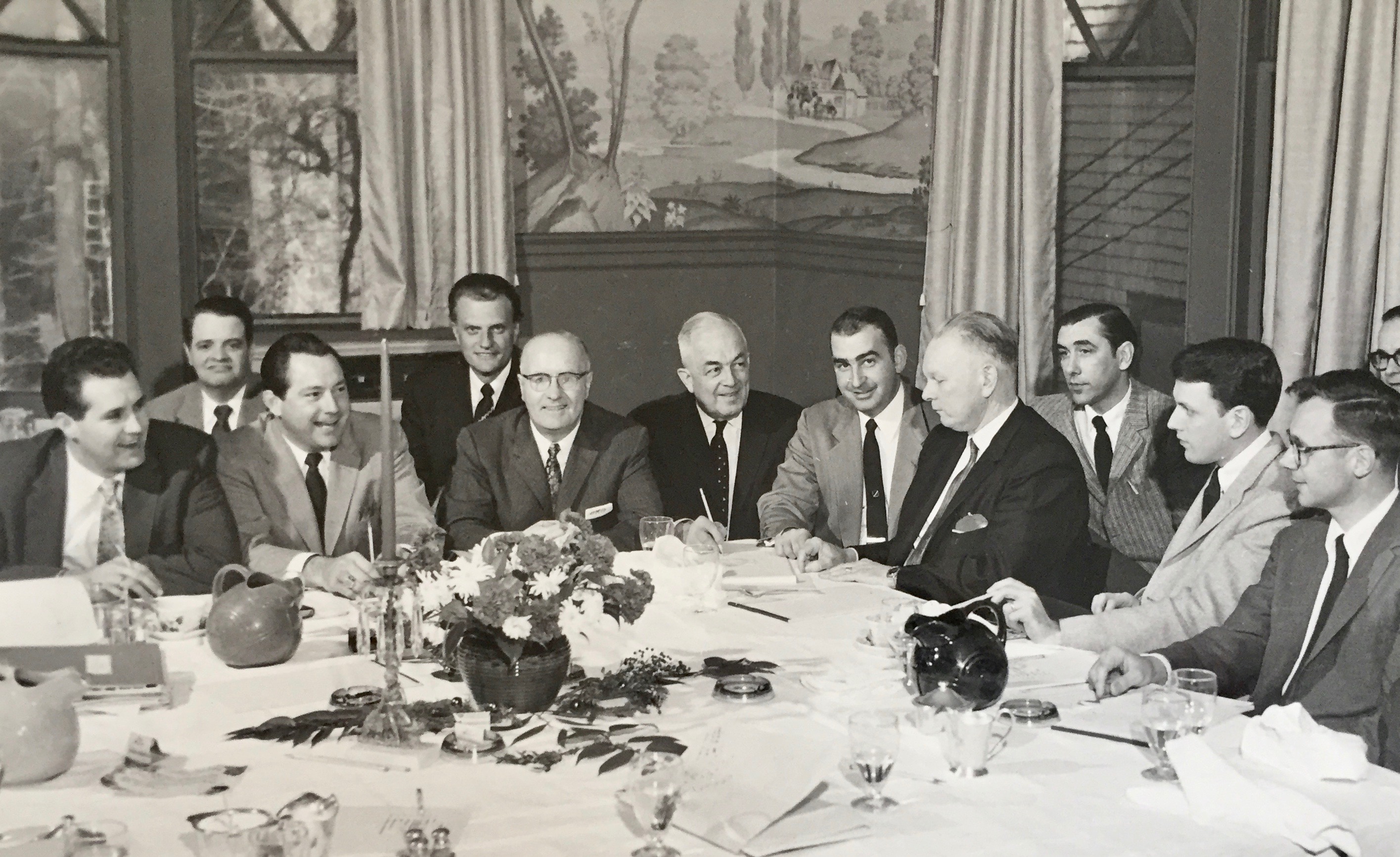 Billy sent Ralph to Australia in 1960 after Billy held a crusade there in 1959.   Pawpaw directed follow up and made contacts for the BGEA to plan another crusade.  At that time, phone calling was prohibitively expensive.  The internet did not exist.  So Pawpaw wrote pages of letter reports: 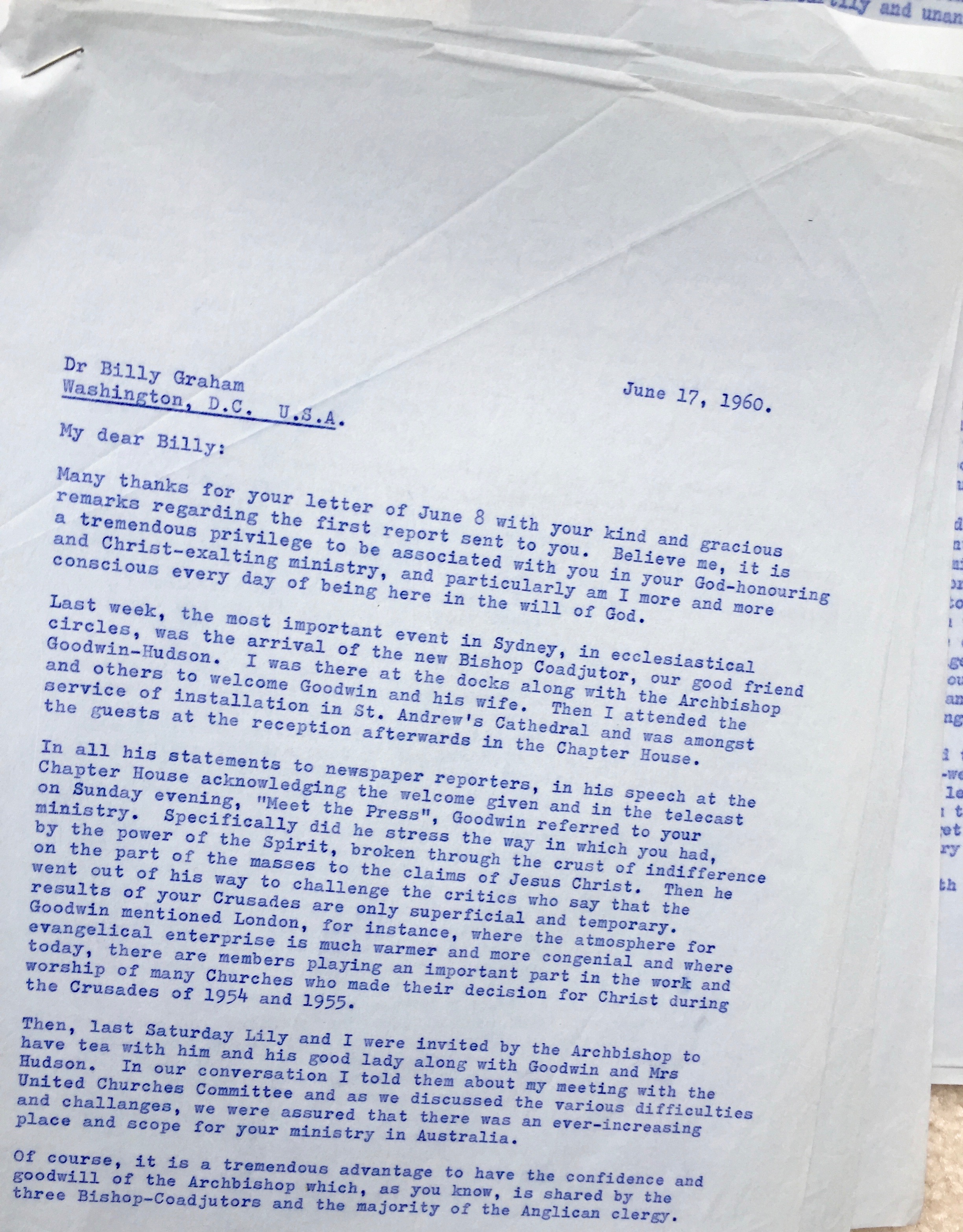 He thrived on his assignment.  He met with the political and spiritual leaders of Australia.  The Governor, Eric Goodwin, attended services where Pawpaw preached.  Thinking like a publicist, he sent articles to Woody Wirt, the editor of the BGEA’s ‘Decision’ magazine.  He talked with media leaders who broadcast Billy’s “Hour of Decision” radio program, to be sure it remained up to date in  Australia.  The reports were filled with descriptions of a vast variety of activities.

“…the services at St. Stephens, I am thankful to say, are wonderfully stimulating and to be able to preach to a crowded congregation each time is a wonderful privilege…”

“…I boosted the Newsweek magazine article…”

“…I was at the docks along with the Archbishop and others to meet Godwin and his wife.  Then I attended the service of installation in St. Andrew’s Cathedral and was amongst the guests at the reception afterwards in the Chapter house…”

“…In asking for your prayers for Nowra (Australia), I am happy to say that the Lord blessed in a very wonderful way.  Altogether, 231 went forward to make a profession of faith in our Lord Jesus Christ.  Believe me, Billy, I have never known such wonderful opportunities for the preaching of the glorious Gospel of Christ and for this year I have 10 united crusades booked… ”

Pawpaw’s letters include anything that would be of interest in advancing Billy’s present and future work in Australia.  One letter includes how he uniquely served:

“…my British background… undoubtedly helps a great deal especially with Australians who, as you know, tend to be a little sensitive regarding anything coming from America…they don’t think of me as an American  “Ralph is just one of us.”  (he had become an American citizen in 1953)…if it helps the cause of Christ by being regarded still as  British, that is alright with me.  For one thing, I still retain my Scottish accent and I don’t suppose I will ever lose it.  Amen!!” 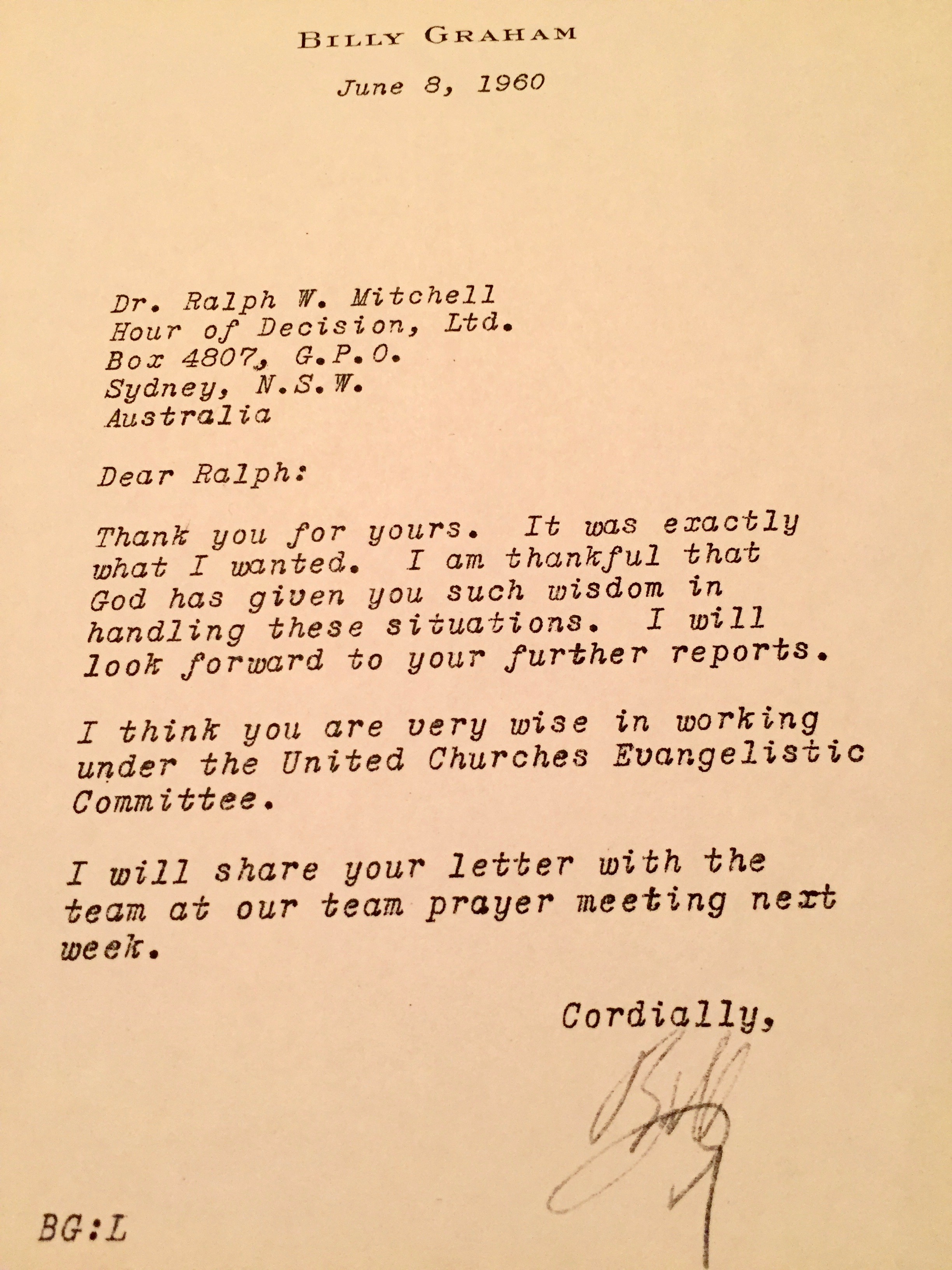 Friendly and detailed, Pawpaw’s letters also remained respectful of Billy, the leader of the BGEA.  Pawpaw was nearing retirement age.

“…I am most grateful to you for allowing me to stay on here for another year and then we plan to return to the United States sometime in March, 1962…”

When Pawpaw and Nana came home from Australia, they showered us with stuffed koala bears and kangaroos, singing “Waltzing Matilda.  We were their only grandchildren.  I know they missed us.

Pawpaw wanted to continue preaching.  But the only available opening with the BGEA was in Minneapolis. Pawpaw was not interested.

What to do?  What’s left for an eager evangelist at retirement age? 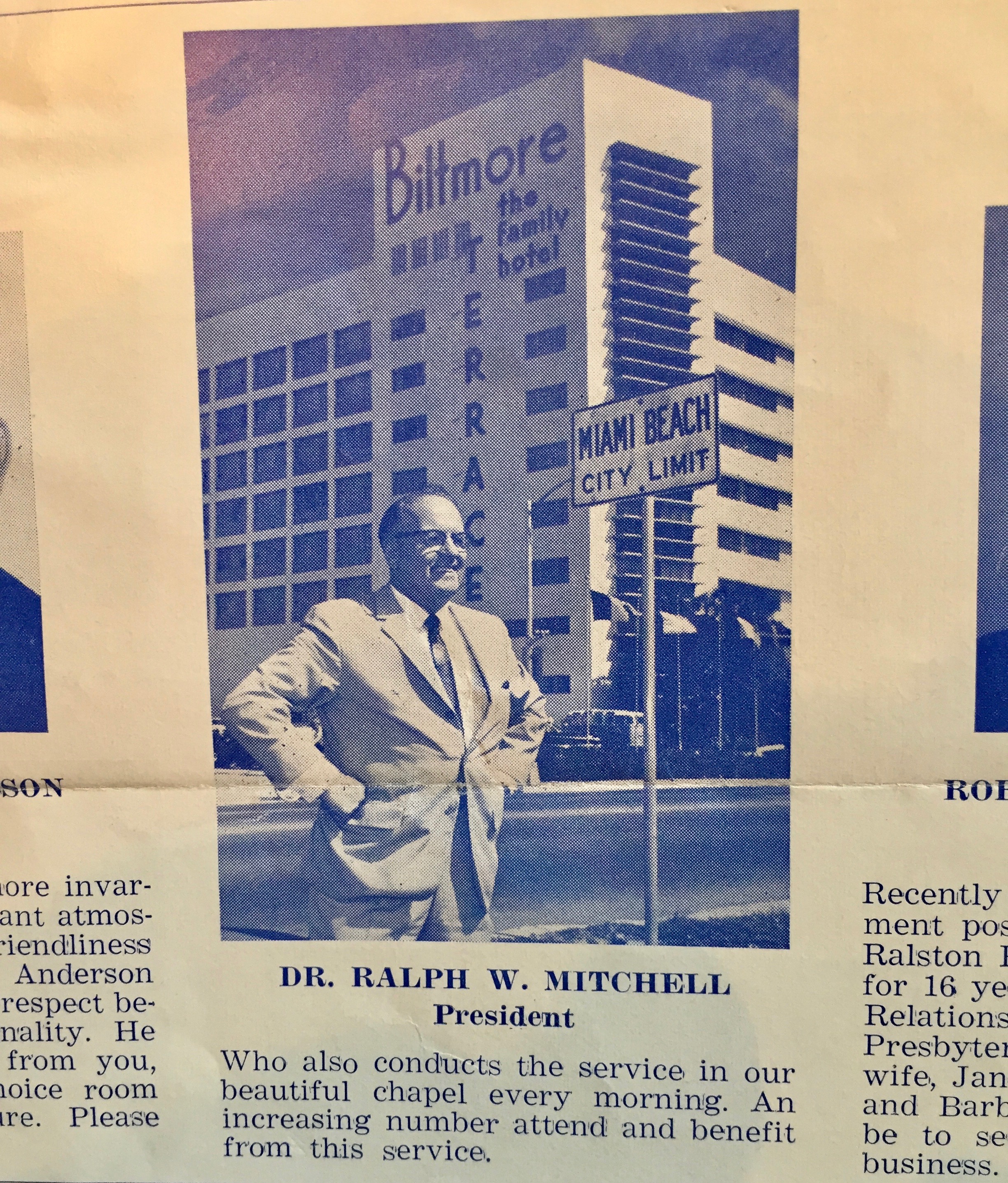 Chicago business executives Harold Anderson and Paul Brandel, friends of Billy, had bought a hotel in Miami Beach.  The ten story Biltmore Terrace, on the northern edge of the city, was small but beautiful; designed by the same architect of the famed Fountainbleu and Eden Roc.  The new owners wanted this to be a luxury ‘Christian’ vacation experience, which meant no alcohol service in ‘The Globetrotter’ bar.   Its’ signature drink was –  ‘an exotic mixture of frozen punch, blended banana, pineapple, and orange sherbet, garnished with pineapple chunks and cherries.’ 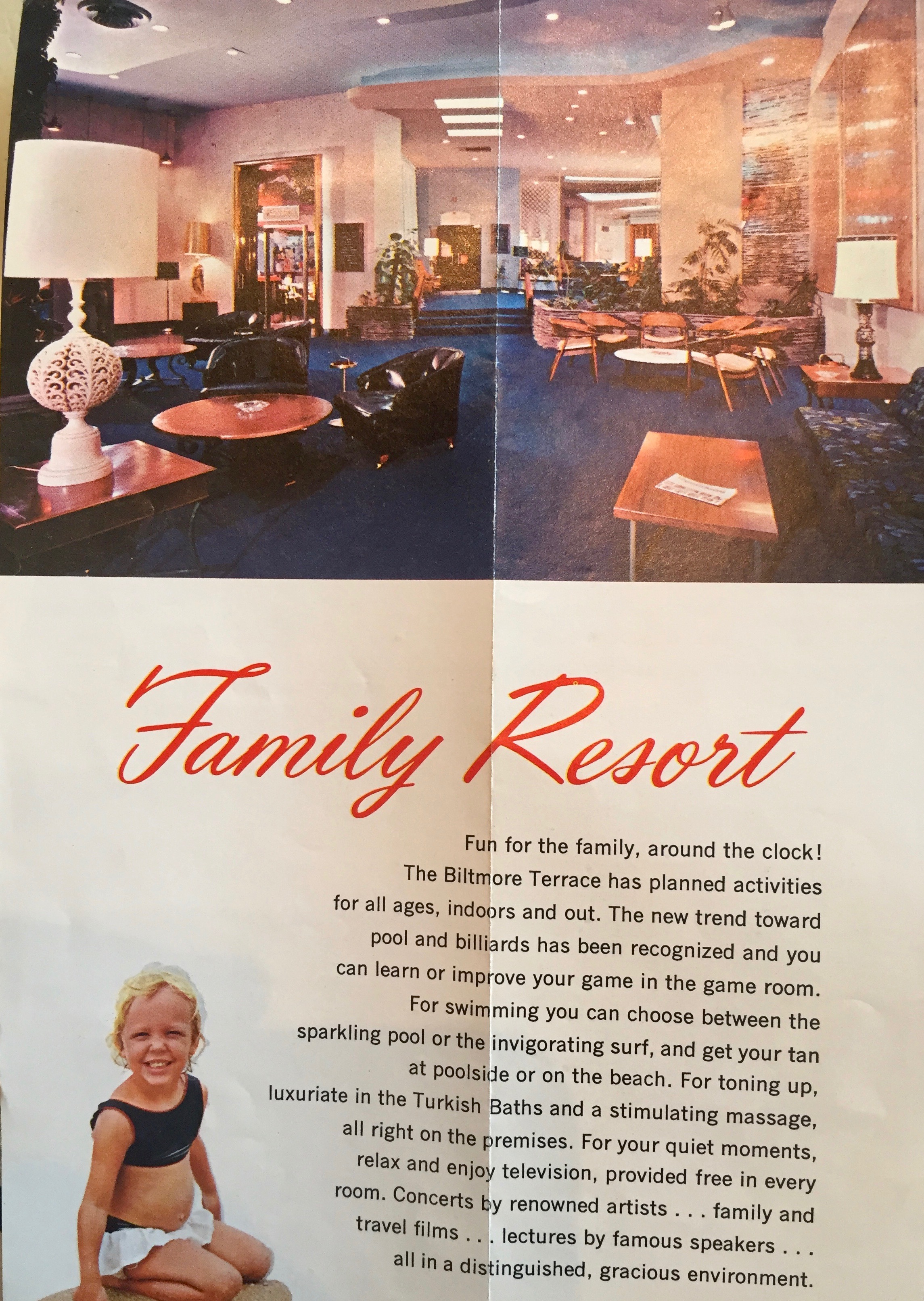 Harold and Paul wanted a chaplain for the hotel, to lead daily chapel services.  Billy recommended my grandfather.  Pawpaw was delighted with his new job.  Besides speaking each morning, he hosted and planned the family events for hotel guests and organizations like the Salvation Army and BGEA.  Contestants from Miami Beach’s “Miss Universe Pageant” even stayed there! 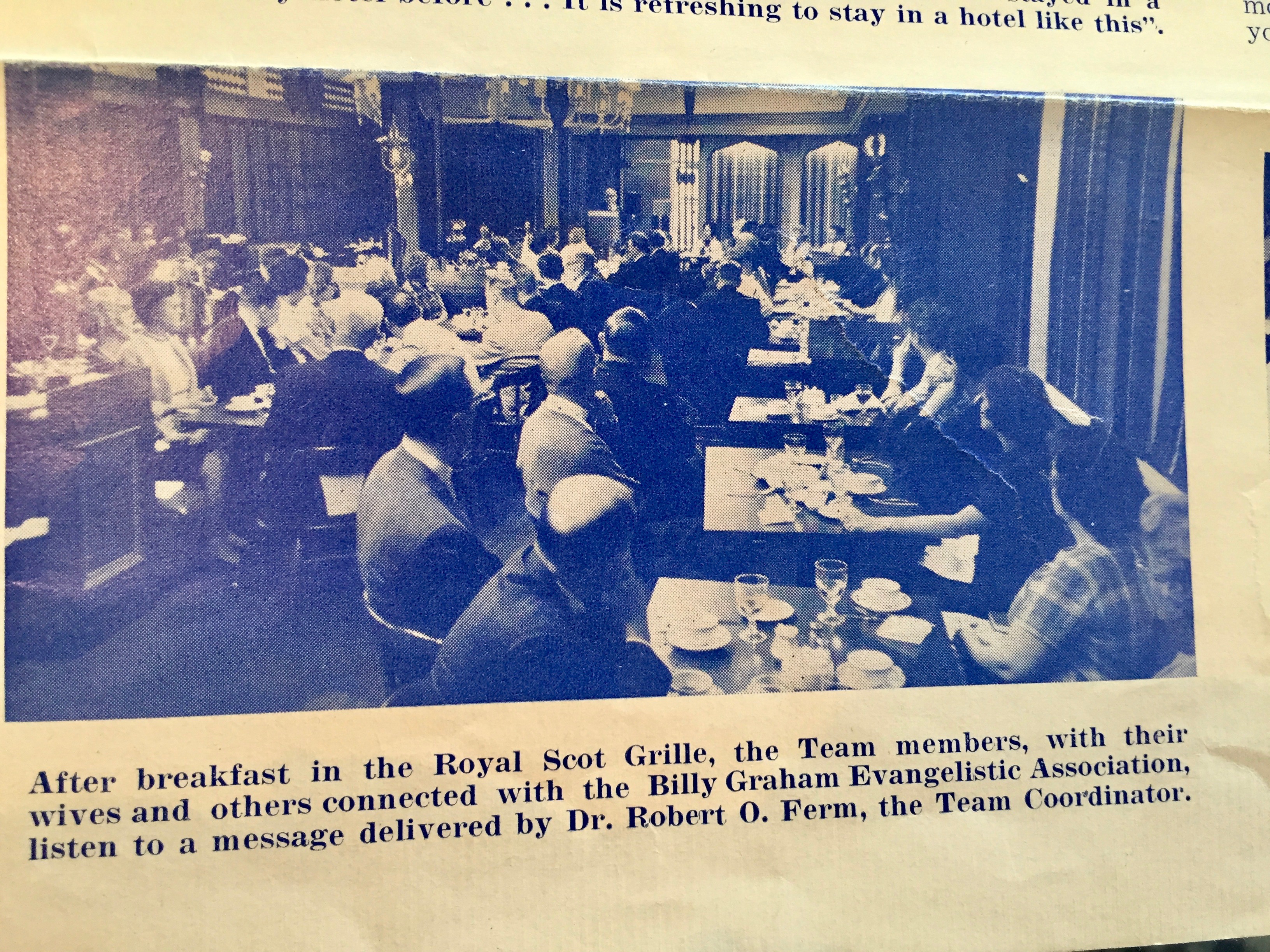 Both my grandfathers taught and preached at Bible conferences.  We often stayed in those ‘rustic’ cabin type accommodations.   The Biltmore Hotel combined the fun of a Bible conference with palatial surroundings.   Wendy, Jennifer and I were ‘Dr. Mitchell’s’ grandchildren;  princesses in a beautiful castle. 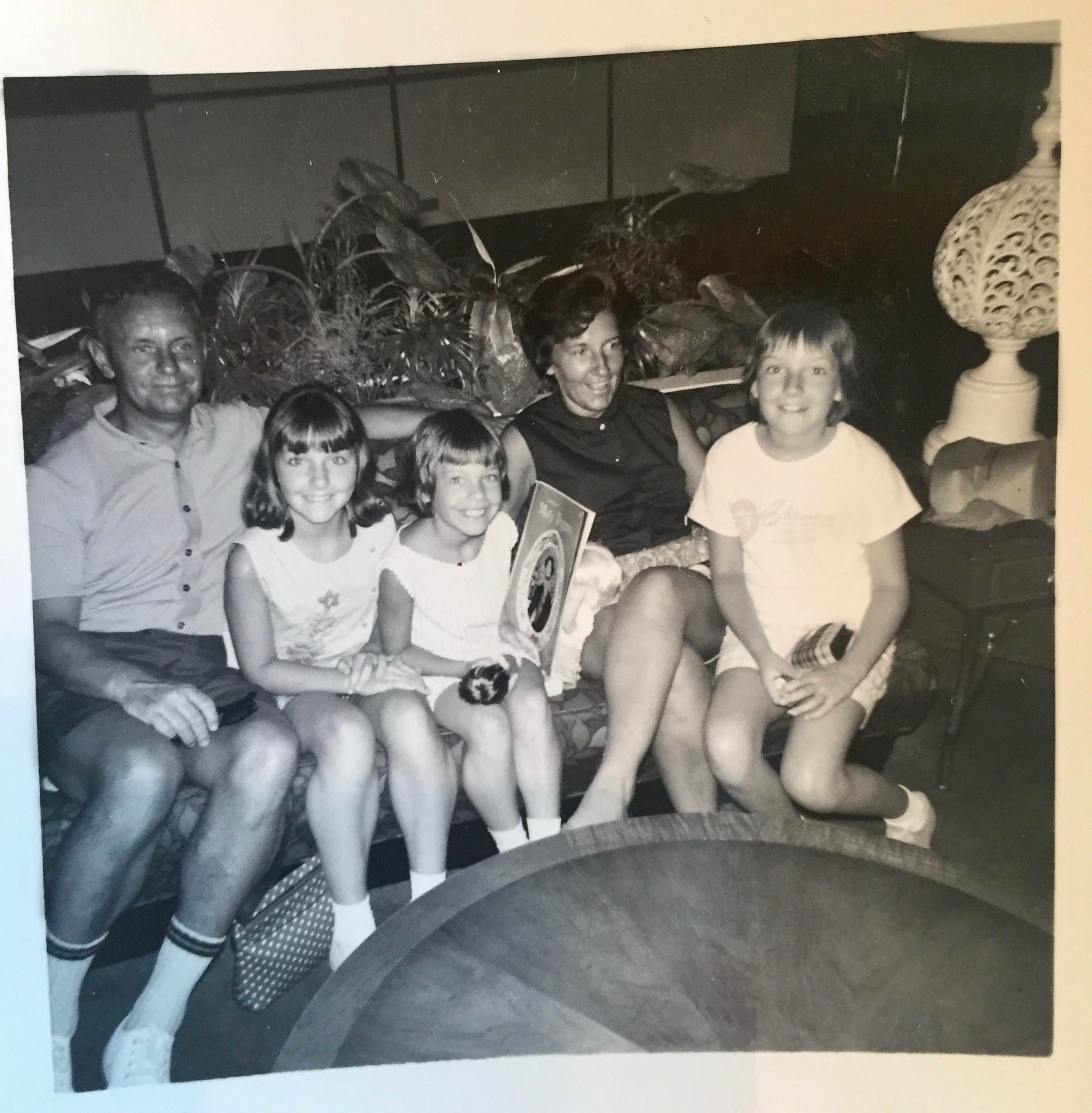 During the day we lived in our bathing suits by the pool and beach.  We were thrilled to swim in the built in pool, something none of us had in Abington, Pa.  We could take ourselves to The Royal Scot Grille for lunch, the red carpeted restaurant on the lower level, order whatever we wanted, and just sign our names on the check!

We zipped ourselves into Sunday dresses for dinner every night, which was held in a dining room filled with white clothed tables overlooking the pool and ocean.  Stained glass candle holders glowed at each table.  After dinner, we attended family entertainment.  Tuesday nights, a movie.  I remember seeing “Pollyana,” “Seven Brides for Seven Brothers” (Pawpaw’s favorite movie), and other films from Hollywood deemed wholesome.  On Wednesday night, the pool director put on a comedy pool show. 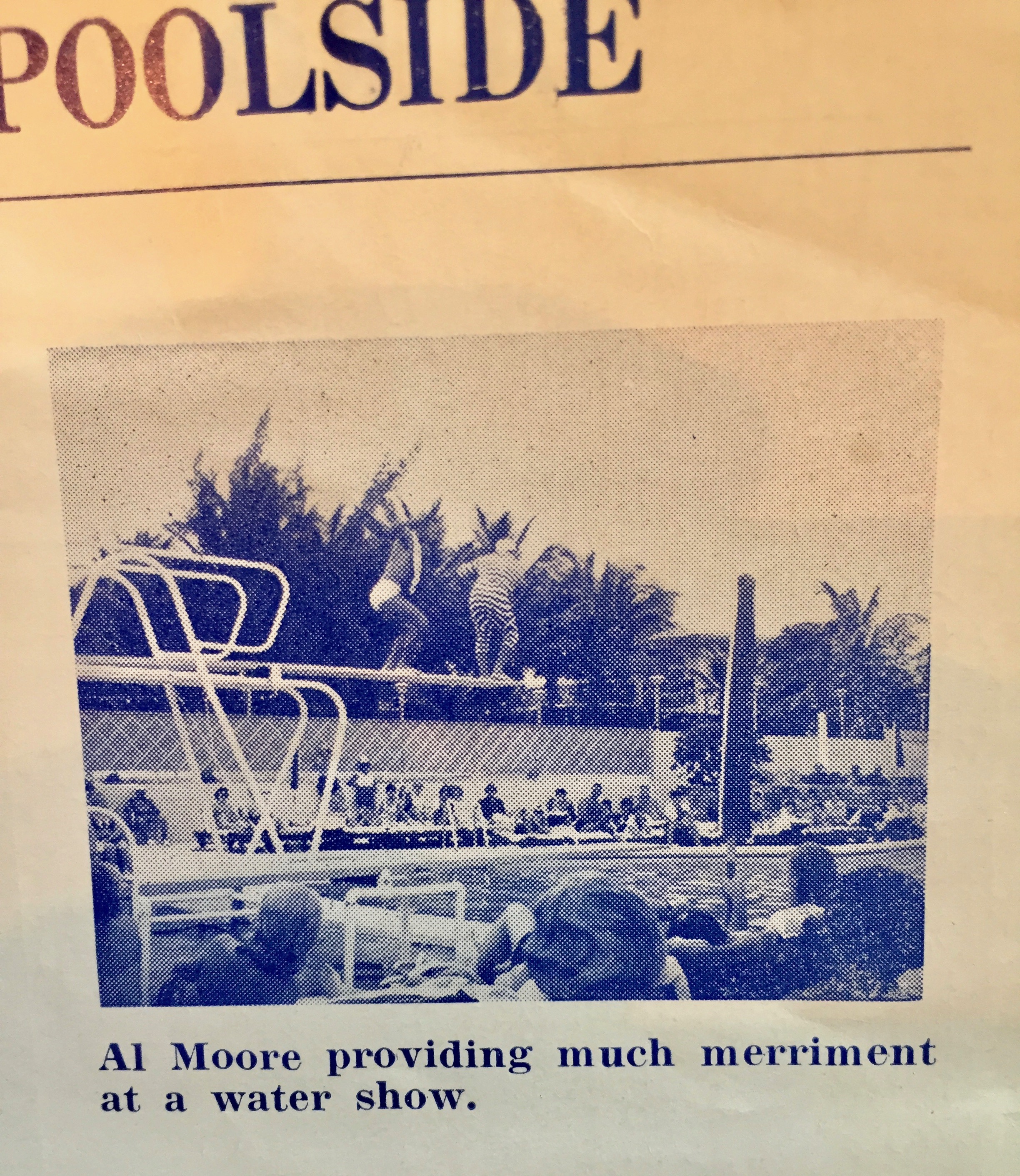 Thursday evening was game night.  When Jerome Hines, the Metropolitan Opera singer, was staying at the Biltmore, he gave a performance and also entertained with an evening of hypnotism.  During the day, Dennis, the Children’s Director, planned activities from a suite of cabanas beside the shuffleboard courts.

Pawpaw was the master of it all.  Here he is cheerfully greeting a guest at the front desk. 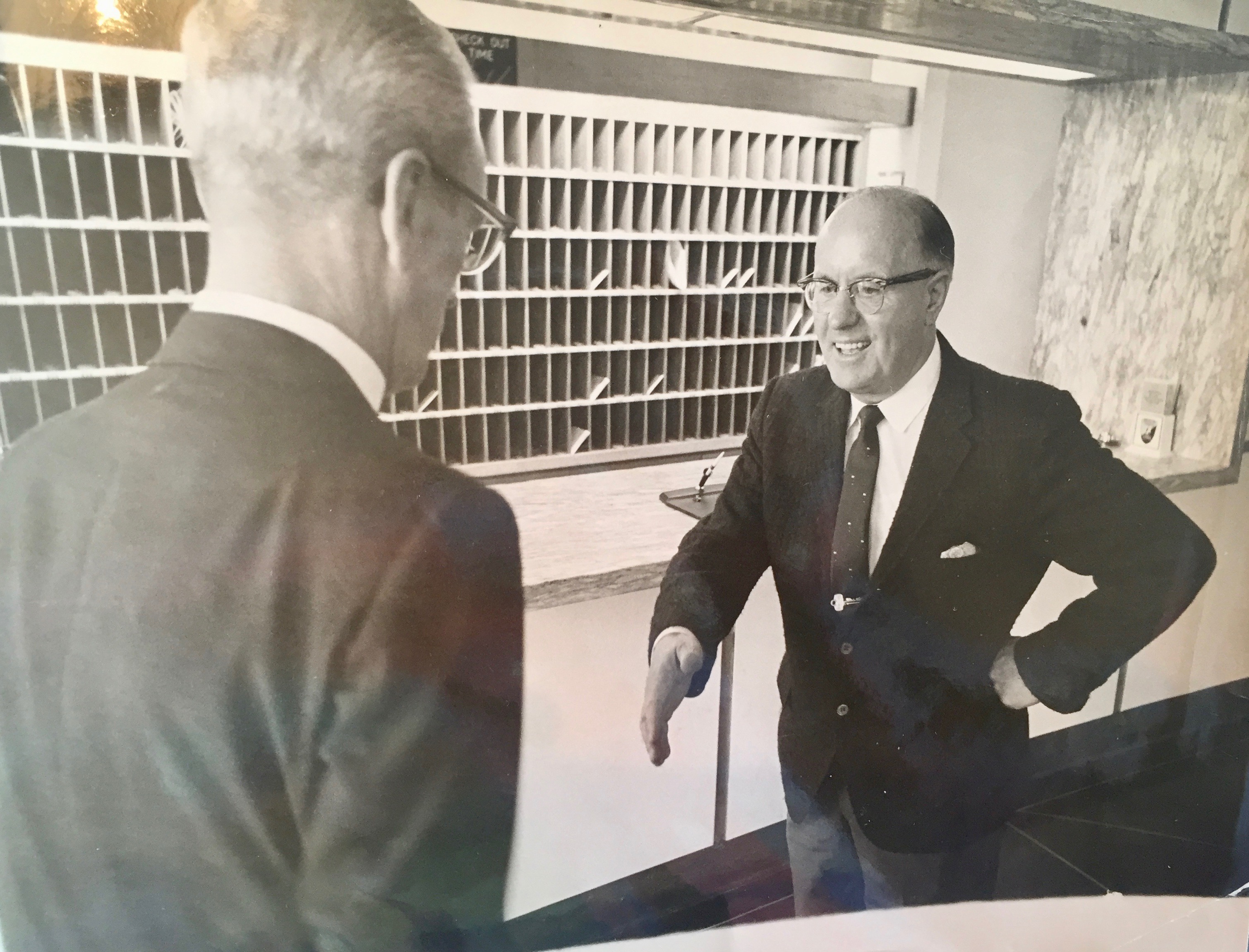 Vacations at the Biltmore gave me time with my grandfather that I had missed while he was a traveling evangelist.

Pawpaw died suddenly of a heart attack on March 25, 1966.  He was rushing along a hallway at the hotel to help a guest.  I was in the fifth grade.  This was two months before our sister Pam was born.  The sister who never met him is the one most like him.  He had been at the Biltmore Terrace only four years.

Dad was a  colorful storyteller.   In digging through the manila folders of Pawpaw’s letters and memorabilia he had saved, I discovered his anecdotes were true.    I cherish my own memories, too.

I can still hear Pawpaw’s Scottish brogue, in response to anything outlandish, “Och, away with ye!”

Or the evening at the Biltmore Terrace Hotel when Tedd Smith,  accompanist with the BGEA, was playing at a piano in the lobby.  Pawpaw volunteered me, 9 years old, to sing “Gary, Indiana” from “The Music Man,” for the hotel guests gathered around the piano.  He knew I could sing.  He was proud of his family. 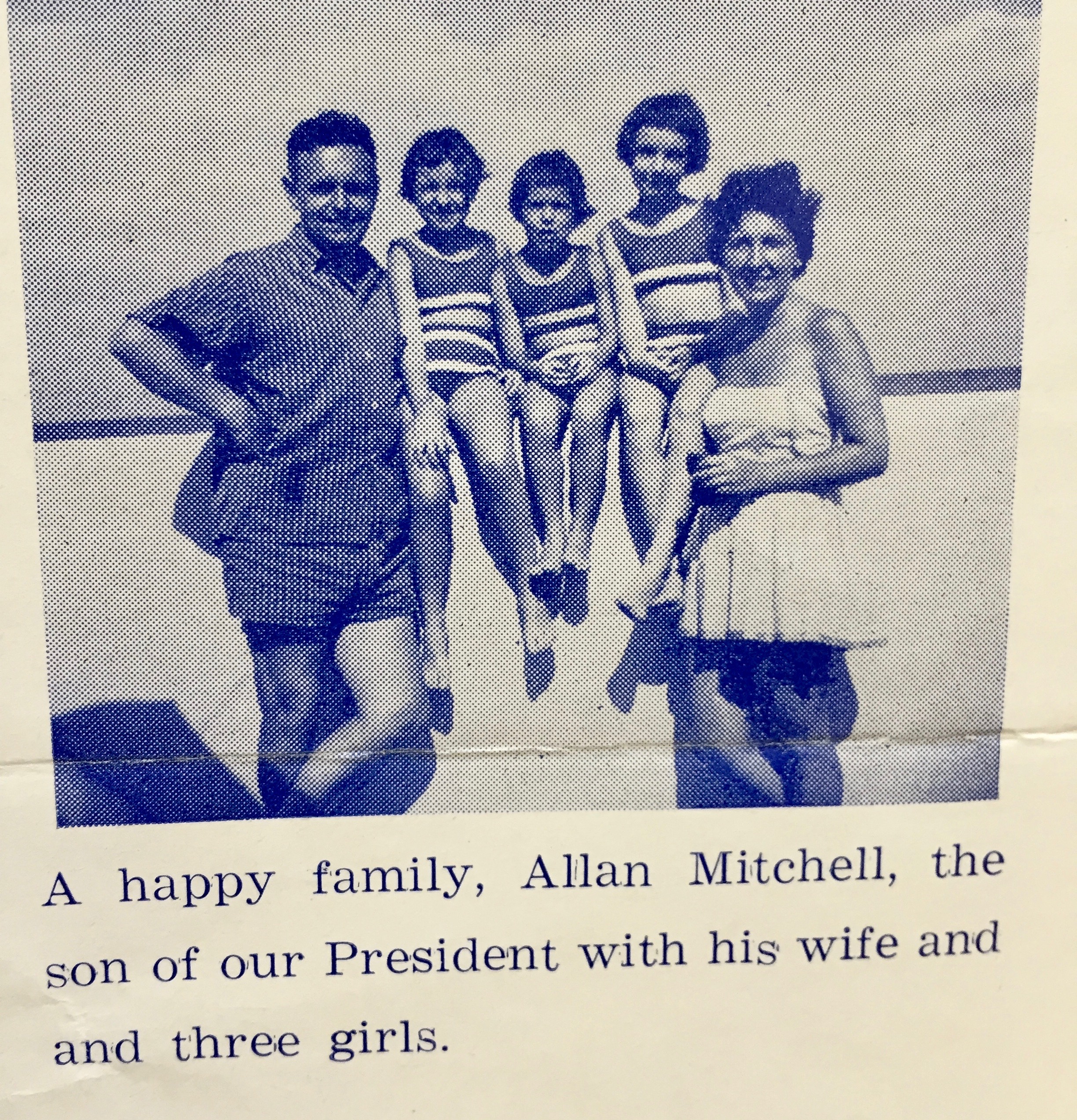 “I have been young and now I am old, yet I have never seen the children of the righteous forsaken, or their children begging bread.”  Psalm 37:25 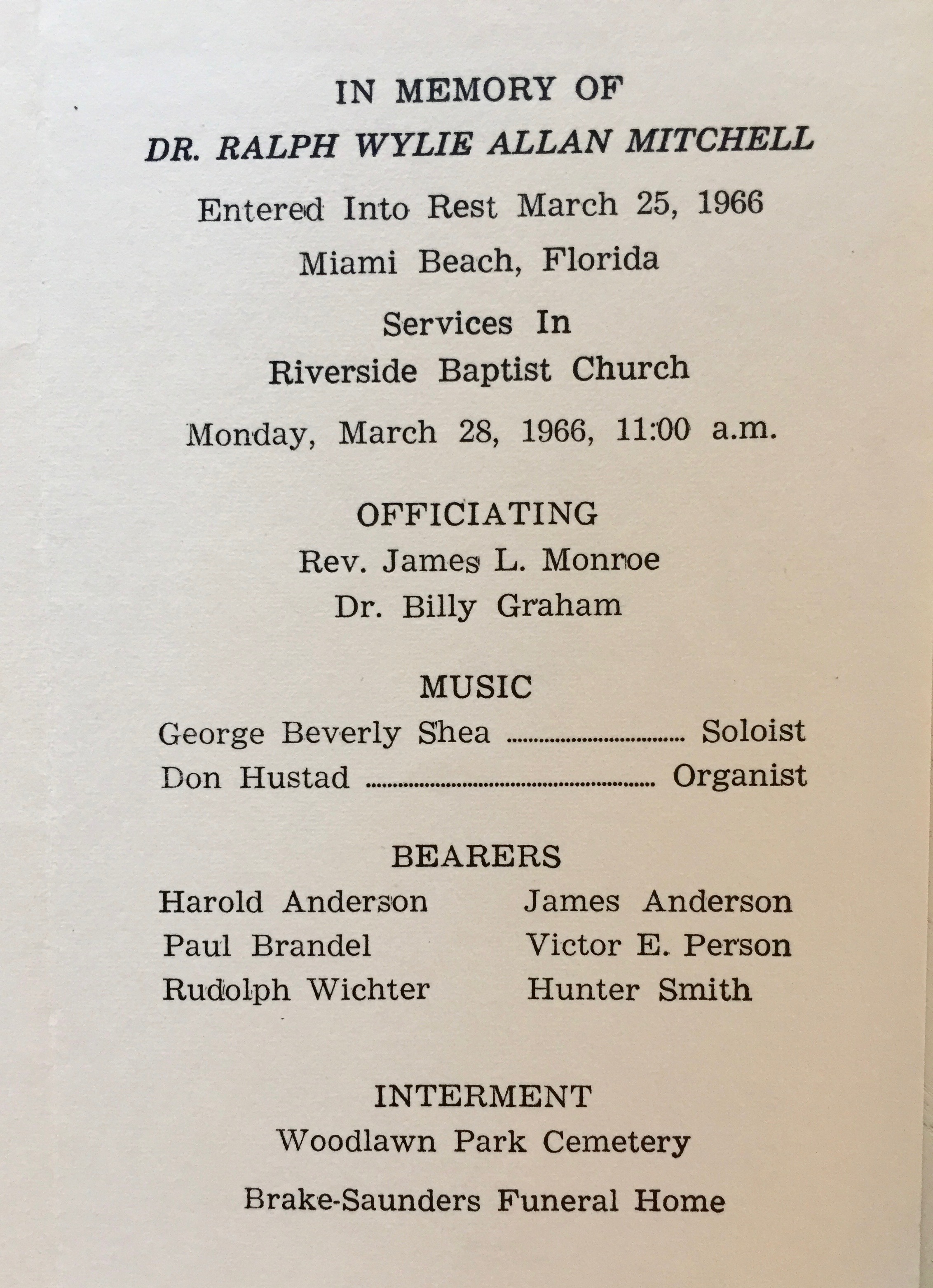 “He loves the Word of God”