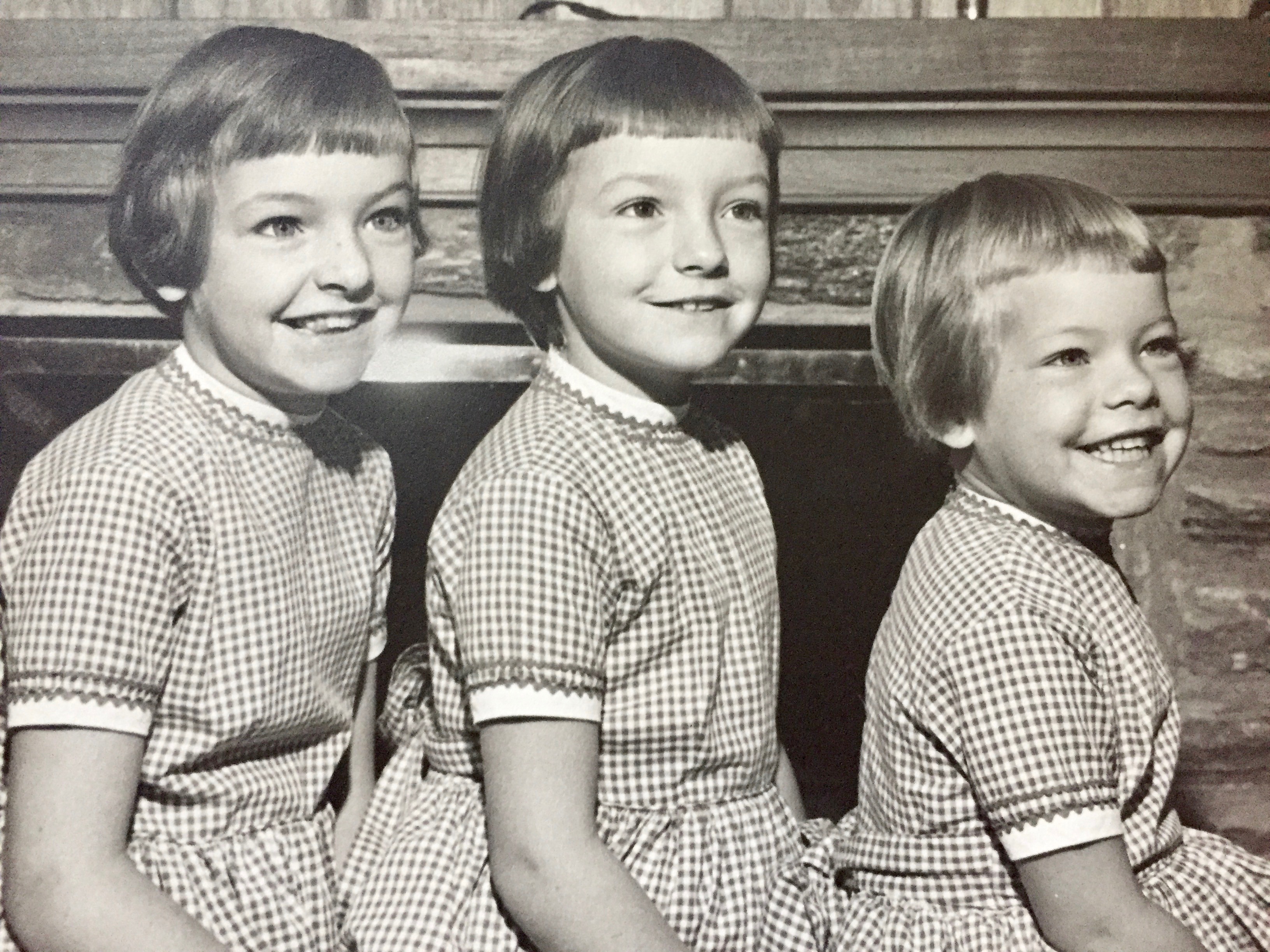 “We’re going on a Mystery Drive!”  With delight Dad dangled the idea in front of us on a rainy Saturday morning.  From our house in Abington, Pennsylvania, to where ever …  our family would be together in our Plymouth station wagon;  Wendy, Jennifer and I lumped in the backseat behind Mother and Dad.

I loved a planned adventure.

Where were we going?   We ended up at the Stangl Factory in Flemington New Jersey, an hour away.  Mother needed more of her ‘Fruit’ pattern cereal bowls or extra plates.    We didn’t catch on, until years later, that this was Dad’s way of Making Life Fun.

The sprawling store was a now an unused kiln surrounded by a maze of showrooms,   stacked high with dinner plates, cups, saucers, bread and butter plates, cereal bowls and fruit bowls.  I loved wandering among the colorful pottery dishes, free from my parents.   They took a long time when shopping. I liked choosing exactly the pattern I would buy when I grew up. 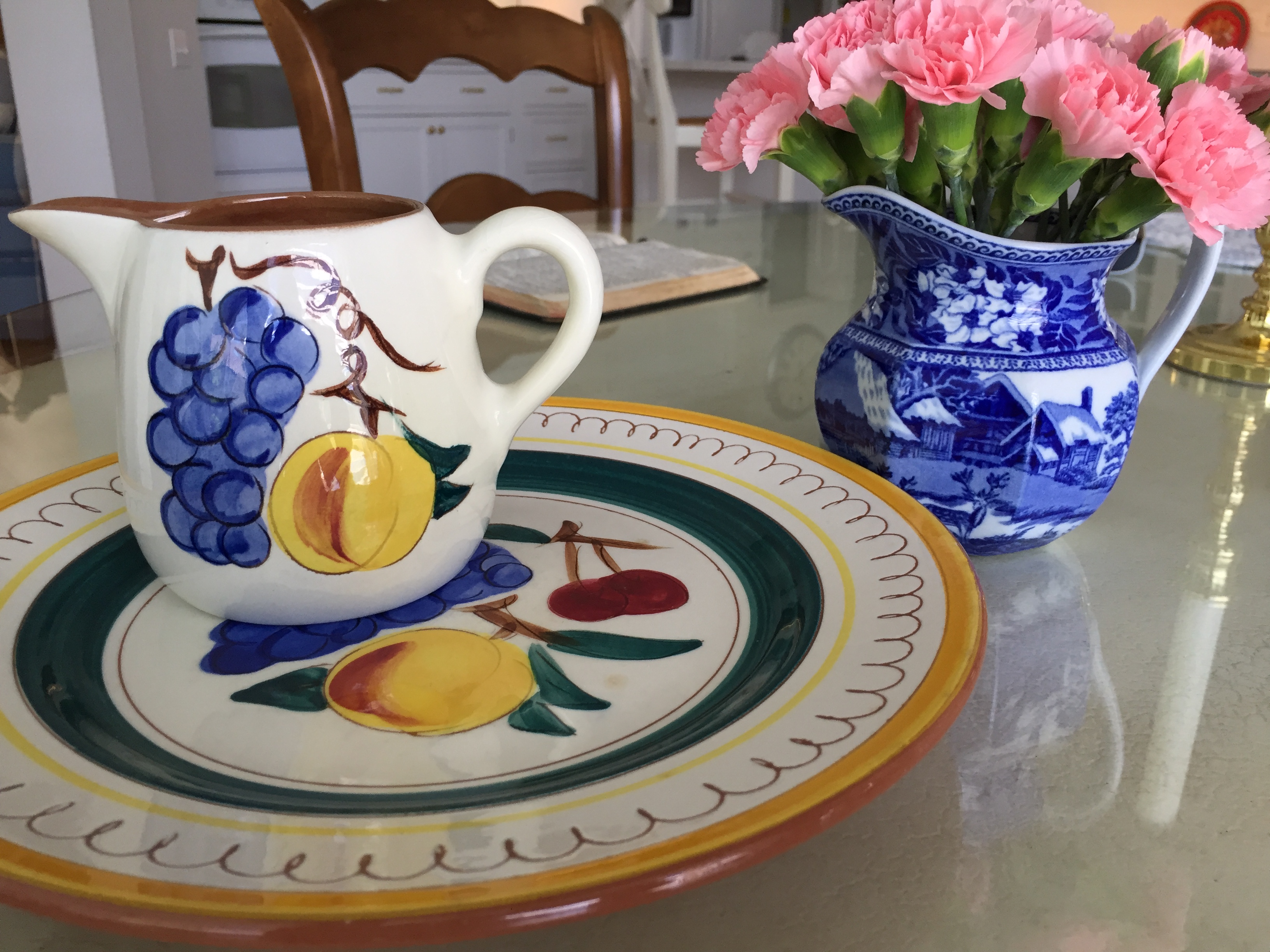 If Dad loved going for a drive, Mother loved dishes.  She had inherited her own mother’s bone china tea cups, made in England.  Mother didn’t like to cook.  But she had the gift of hospitality, and often invited friends and new people from church for a meal in our home.  The food looked more enticing than it was, because we ate on  such nice dishes.

This Mystery Drive combined the best of both worlds for Mother and Dad: cars and dishes.  Dad inherited his love of cars and driving from his Uncle Bertie, his mother’s only sibling.  Here’s Dad’s sister Ruth at the front of Bertie’s car, with two unknown children, and Dad, on the far right, leaning forward in the exact pose I’ve seen my own son Mike take.  Mike inherited Dad’s love for cars and driving. 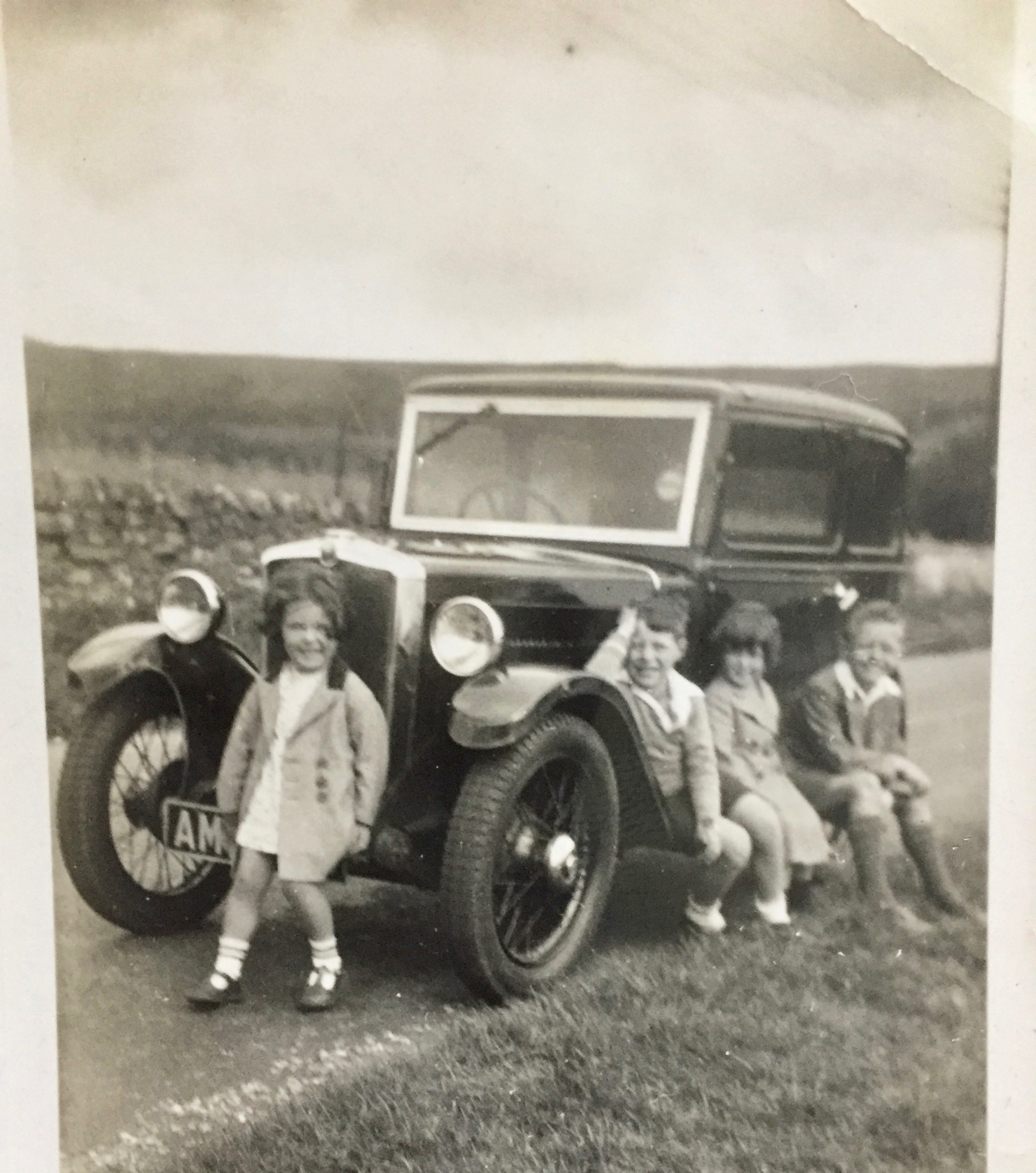 To my Dad, Uncle Bertie was a family patron saint.  Wendy and I met him in 1975 when I was in college, on a Wheaton in England program.  She was traveling with a friend.  We stayed at the home he shared with his wife, Aunt Divinie, in Dumbarton, Scotland.  They took us for a ride in their car with a picnic lunch at Loch Lomond, the lake that holds the Loch Ness Monster.

Uncle Bertie was the older brother Dad never had.  Bertie was close to his sister, Dad’s mother Lily, and even included (seated on the right)  in this family portrait.  Look at the expression on Dad’s face!  I have a picture of Dad, age 19, in the Royal Marines, with hair that looks just like Uncle Bertie’s. 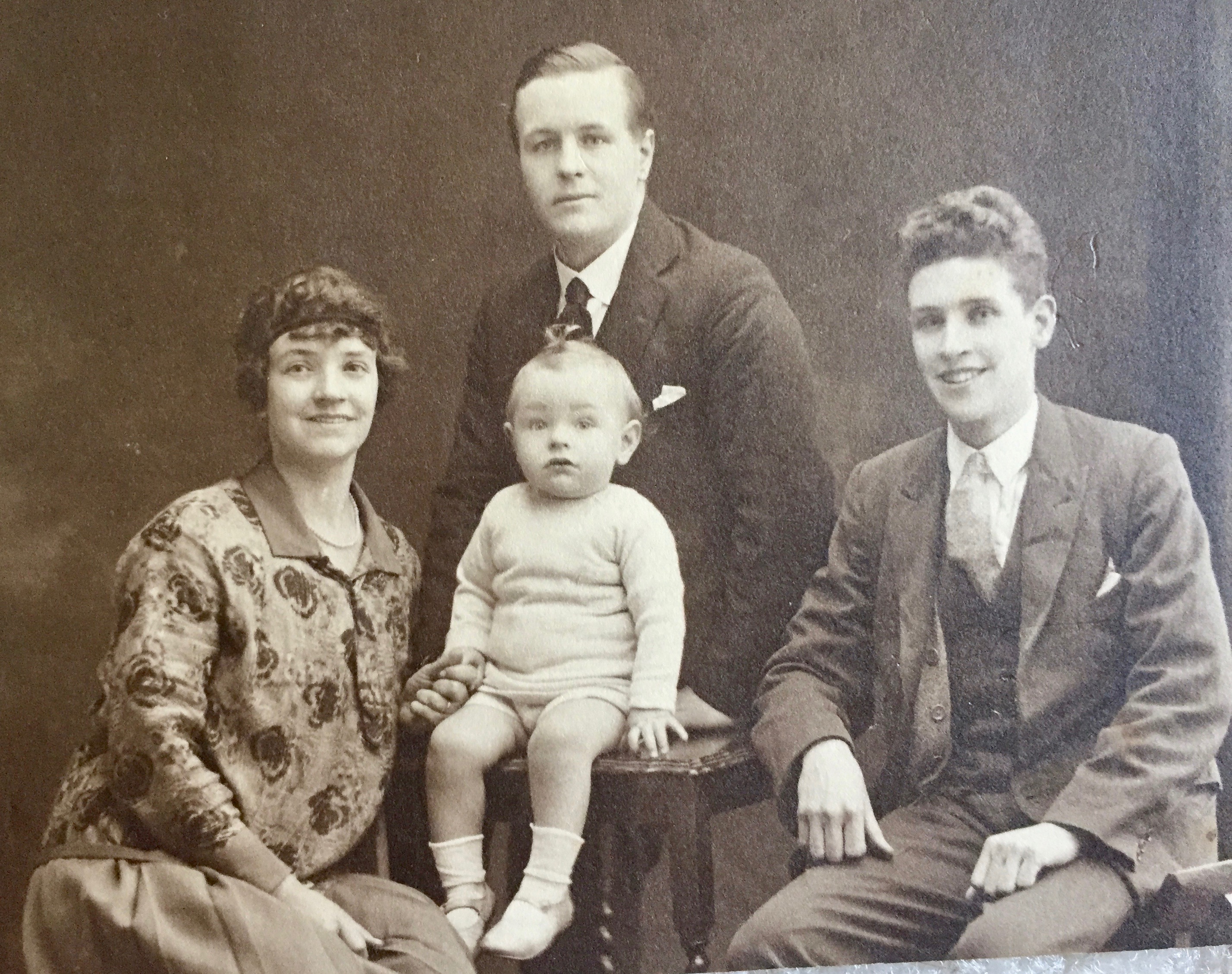 In 1939, Dad and his sister Ruth left their parents’ home in Newcastle England, to live with Grandma Wilson, his Dad’s mother, and Uncle Bertie.

People have heard of the blitz of London in WWII.  Many don’t realize other English cities experienced German bombing.  In Newcastle-on-Tyne, northern England; 400 people died, thousands were injured and homes destroyed.  Dad’s parents stayed; PawPaw was the pastor of his church and a neighborhood leader.  30,000, mostly children, including my Dad and his sister, were evacuated.

For the two years the Germans were dropping bombs on Newcastle, Dad and Ruth were safe in Grandma Wilson’s home, on Scotland’s west coast.  Uncle Bertie often dropped by and  told them stories before they went to sleep about “Blackie” and  “Whitey”, two fictional dogs.  Dad told us those stories.  Uncle Bertie took them to “Laurel and Hardy” movies.  Going to the ‘cinema’ was not off limits for Christians, like it was in America.

If Uncle Bertie was known for hijinks and fun, Grandma Wilson was a legend.  Christina Sutherland Wilson stood less than five feet tall, even in her Sunday shoes (far right). 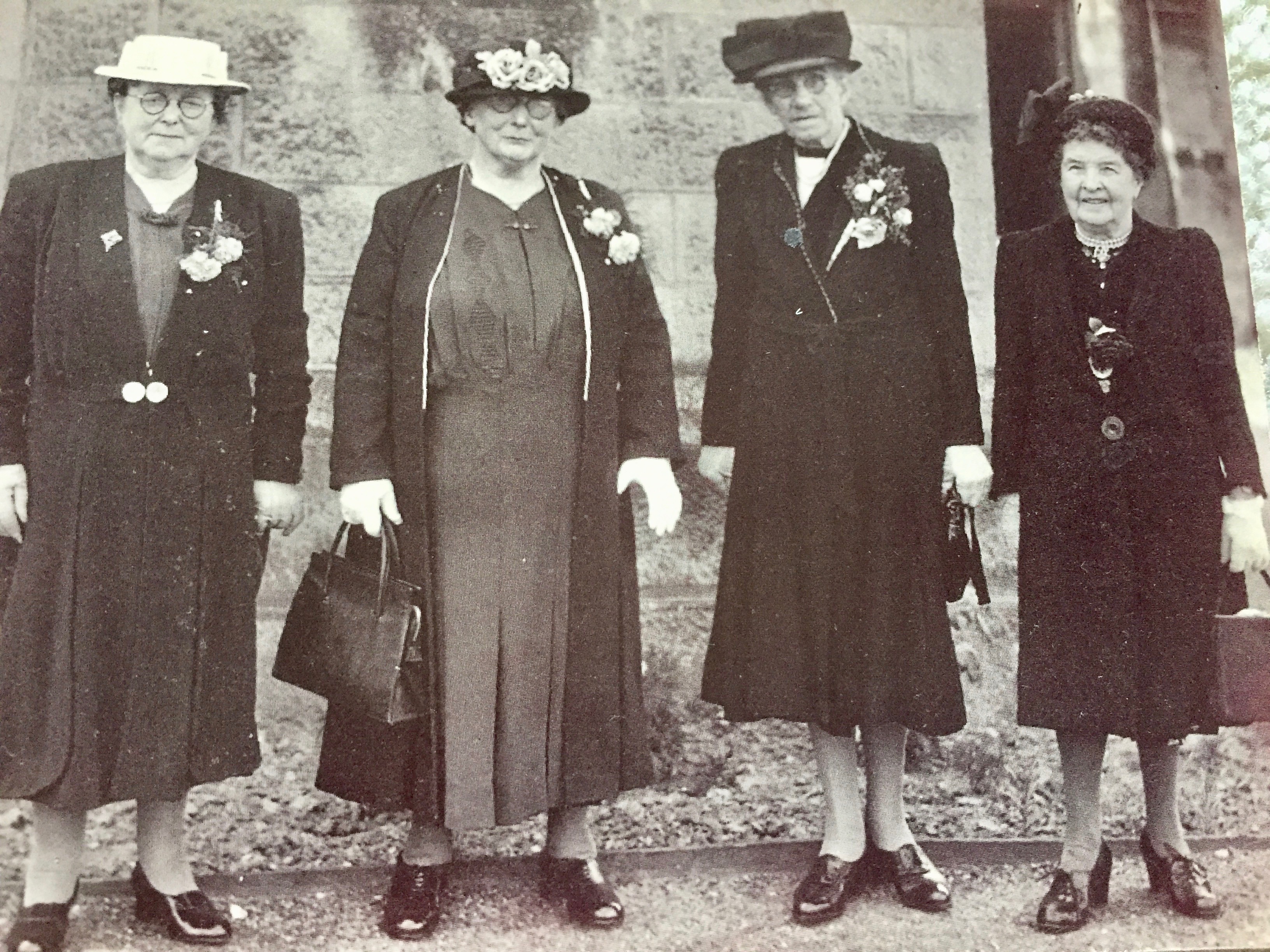 “She could pick up hot coals with her bare hands and throw them back in the fire.”

“She could sing like a bird.”  Dad attributed my singing ability to Grandma Wilson.

“After cleaning up the lunch dishes, she would sit at the kitchen table, lay her head on its’ wooden surface, toss a dishtowel over her head, and have a rest.”

Fast forward to 2013.  Dad and Mother moved to Regency Oaks Senior Living, five minutes from  Wendy, Jennifer and me.   Because of Dad’s poor health, we sold his car.  He’d bought it,  a brand new Chrysler, the year before.

We took stock of all the dishes Mother had accumulated.  She still had all her Stangl ware, and her mother’s tea cups, which she began to give away to granddaughters.   On their many trips to England Mother had  chosen her own teacups and plates.  We found Nana Mitchell’s dishes from Scotland.  We ‘oohed’ and ‘aaahed’ over those dishes.  We placed dibs on who got what.  We wondered about who in the next generation would even want them?

Dad’s sister Ruth died.  She and her husband Donald did not have any children.  But Uncle Don wanted to keep Grandma Wilson’s china, that Aunt Ruth had inherited, in the family.  Wendy drove up to Penney Farms to pick it up.  Uncle Don had carefully packed the delicate white bone china, edged with red and navy swirls,  into boxes.

“Don’t worry about it,”  Wendy reassured him.   Wendy loved dishes, but she knew we had plenty.

Dad, who played tennis daily until he was 82, grew so frail he could hardly walk.   Our son Mike bought a brand new BMW convertible.  I think it was a BMW, I don’t know because I don’t care about cars.   Dad cared.  When he heard about Mike’s new car, he mentioned he’d love to go for a ride.  On a lunch break from work one day, Mike stopped by and took Dad for a spin.  I took a picture of Dad, seated beside Mike on the front seat.   Mother kept that picture on her dresser.  That drive lit up his final days.

Then Mother died. too.  We’re still shuffling the dishes she had between us sisters.  We display some of them.  Some are in drawers.  I treasure a tea cup I use for tea most evenings.  If it ever slips out of my hand and smashes, I will cry. 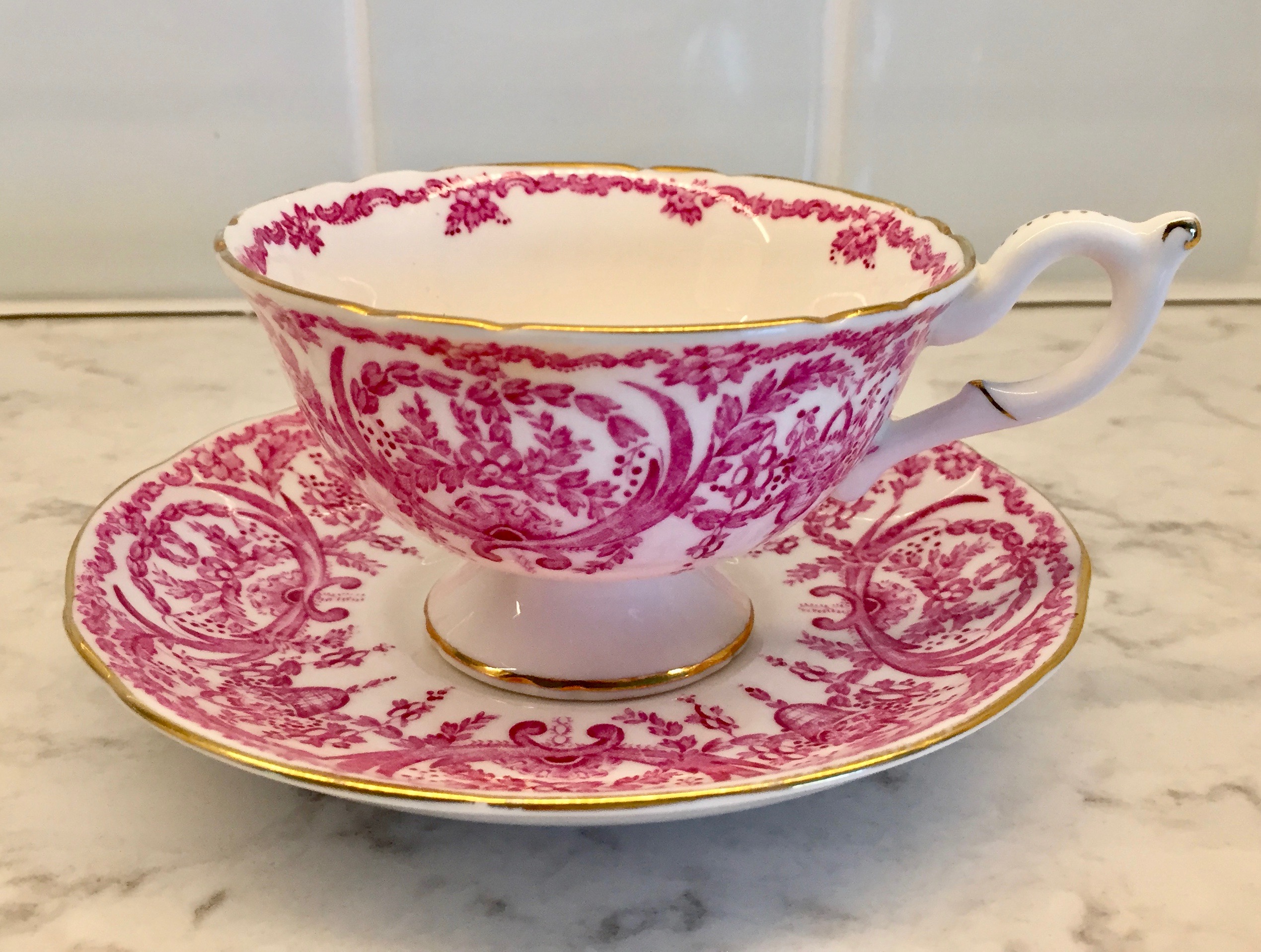 Besides enjoying our family china, I’ve been studying the family documents, letters and pictures Dad saved in organized manila folders. , After studying them, I have more questions.  Last week I telephoned Uncle Donald.  Maybe he would have answers.  He told me he’s in hospice care now, then carried on with as many stories as he could remember.

He  told me this story about Dad’s dad:

“A good friend of your grandfather said to him, “Ralph, if you were walking down the street, and a manhole cover was missing, and you fell down into that hole, you would come up with a fish!”

In a few days Wendy and I are planning a Mystery Drive, returning to Penney Farms.  In honor of Mother and Dad, and Uncle Bertie we’ll visit with Uncle Don, and retrieve Grandma Wilson’s soup tureen.  I want it!

“To understand and reconnect with our stories, the stories of our ancestors, is to build our identities.” – Irish author Frank Delaney 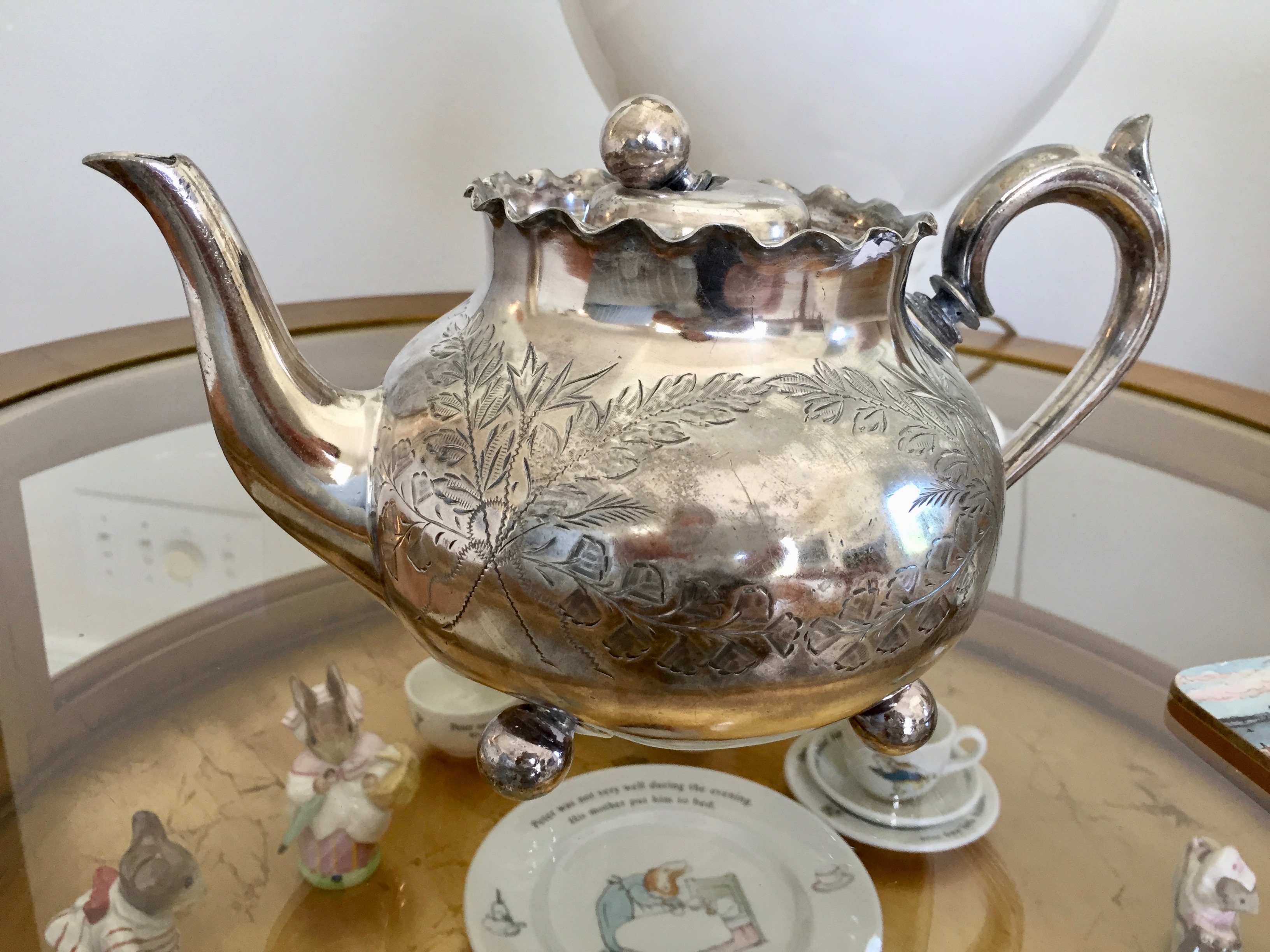 Grandma Wilson’s silver teapot that my mother accidentally left on the stove so that the knob on the top accidentally ‘melted’ to the side.  I watched Mother pour tea from this beauty.