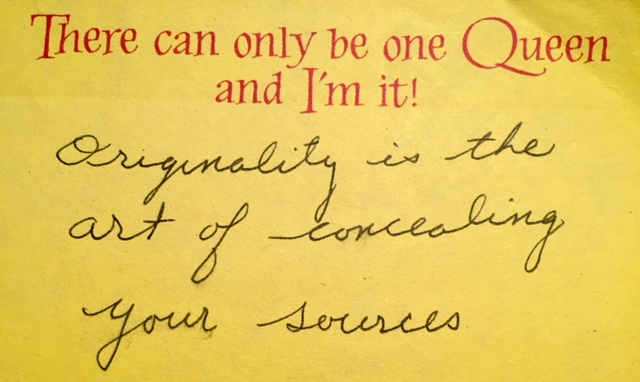 There is only one Queen and it is Lady Gaga.
She’s an original. She steals each scene with her unblinking eyes (those eyes!), honesty, acting, singing and everything – the list goes on and on.
I heard a lady in the audience upon exiting say, “well I never liked Barbra’s voice anyway…” That is sacrilege. But, dare I say, Lady G was better in this role.
And Bradley Cooper supports her in sheer sex appeal/charisma. Tiny, minor quibble: what was with his extra deep throaty voice? Wish he had just talked in his regular voice.
The writing is great/believable dialogue, thought provoking themes/ideas.  One about what it means to be an artist:
“You have to dig deep into your soul and say what you need to say,”  Bradley Cooper’s character tells Lady Gaga’s character.  Inspiring.  The first half of the film makes you feel the thrill of being an artist who is ‘heard’ and adored by fans; the second half shows the sheer drudging work, sacrifices and pain.
Picture frameable cinematography.  Supporting characters: dead on.  Speaking of death, the story is a downer. I went into it knowing that, from the Judy Garland/James Mason version, and the Barbra Streisand/Kristofferson version. One star ascends, one descends. Alcohol is not your friend.
But it’s not what happens in this story, it’s how they show it.  Oh how they show it.  Every particle of this film is superb. Lady Gaga especially. Wow!
Loved at the very beginning either she is singing like Judy Garland or it is Judy Garland… couldn’t tell. And her last song; an echo of Judy… gut wrenching. The whole film has special nuances like that throughout … A++