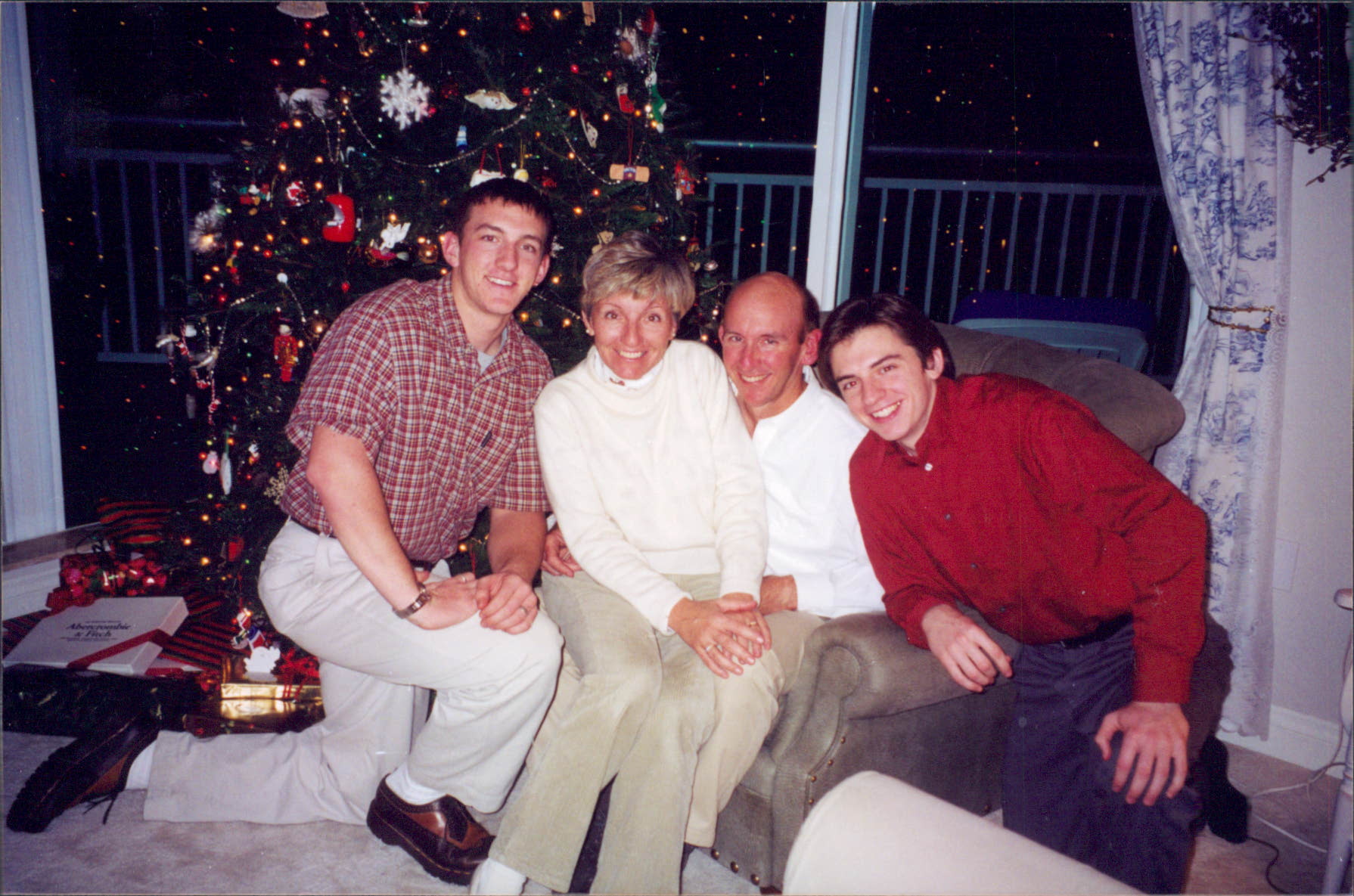 “It could be worse.  You could be on the Bataan Death March.”

Mike and Jeff, one at Wheaton, one at Countryside High, were impossible to Christmas shop for at this age.  I was trying to warn them that the gifts under the tree this year might not be great.  Comparing that to the Bataan Death March, a  65 mile trek of prisoners of war through the Philippine jungle during World War II, is a psychological idea. View your own hard time with something far worse.  Presto, you feel better.

Most Christmases were delightful, and some memorable, like the year Jeffrey was born two days before Christmas.  And 29 years later to the day, our granddaughter Sophie was born!

Christmas 1990 was another.  We had moved into the house at 6700 Cornelia Drive.  Mike was 10.  His hobbies were ice skating at the Cornelia School rink, playing video games and collecting baseball cards. 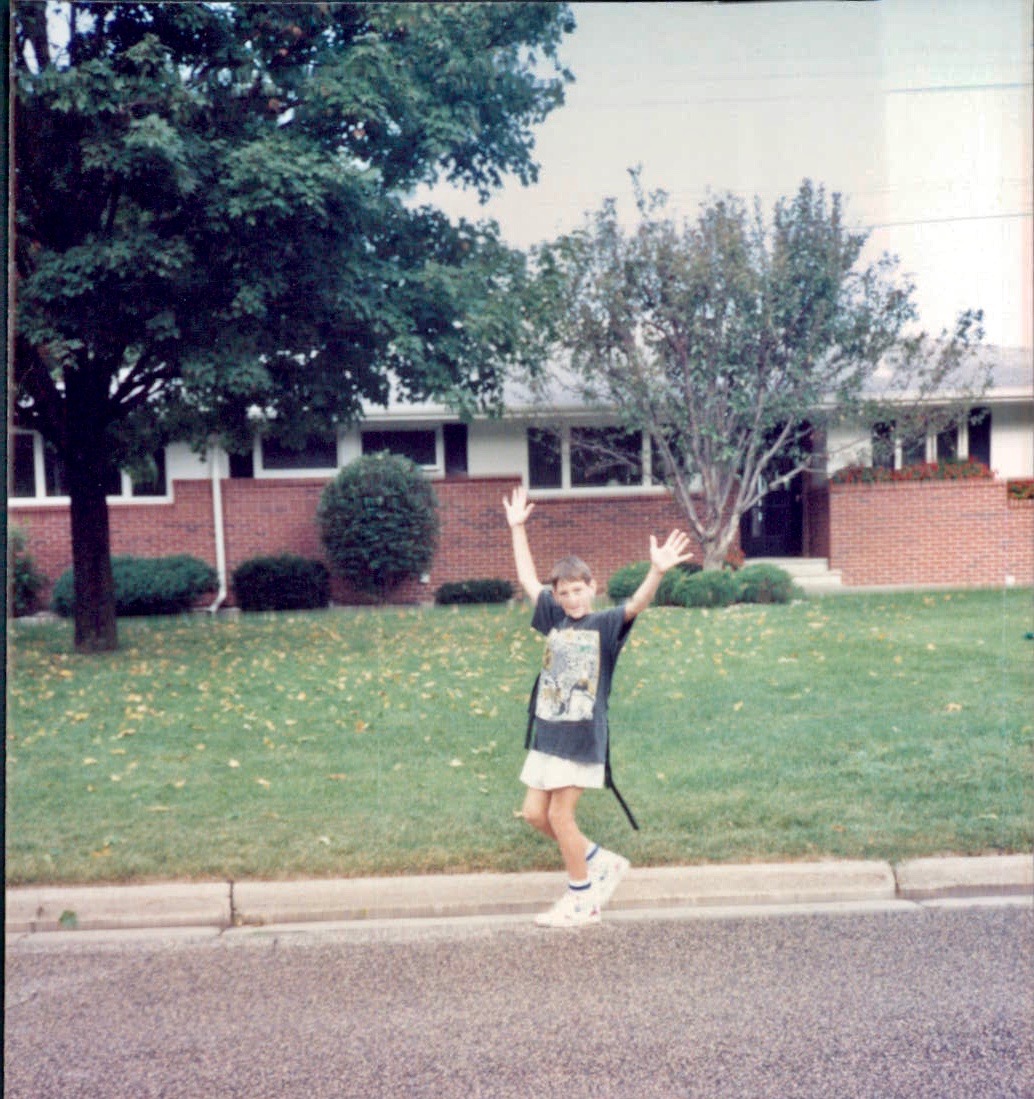 Jeff, who turned 9 on December 23rd, collected baseball cards, too and sat right beside Mike, reading video game instructions to him while he pushed the buttons on the controller.  Jeff also loved reading comic books. 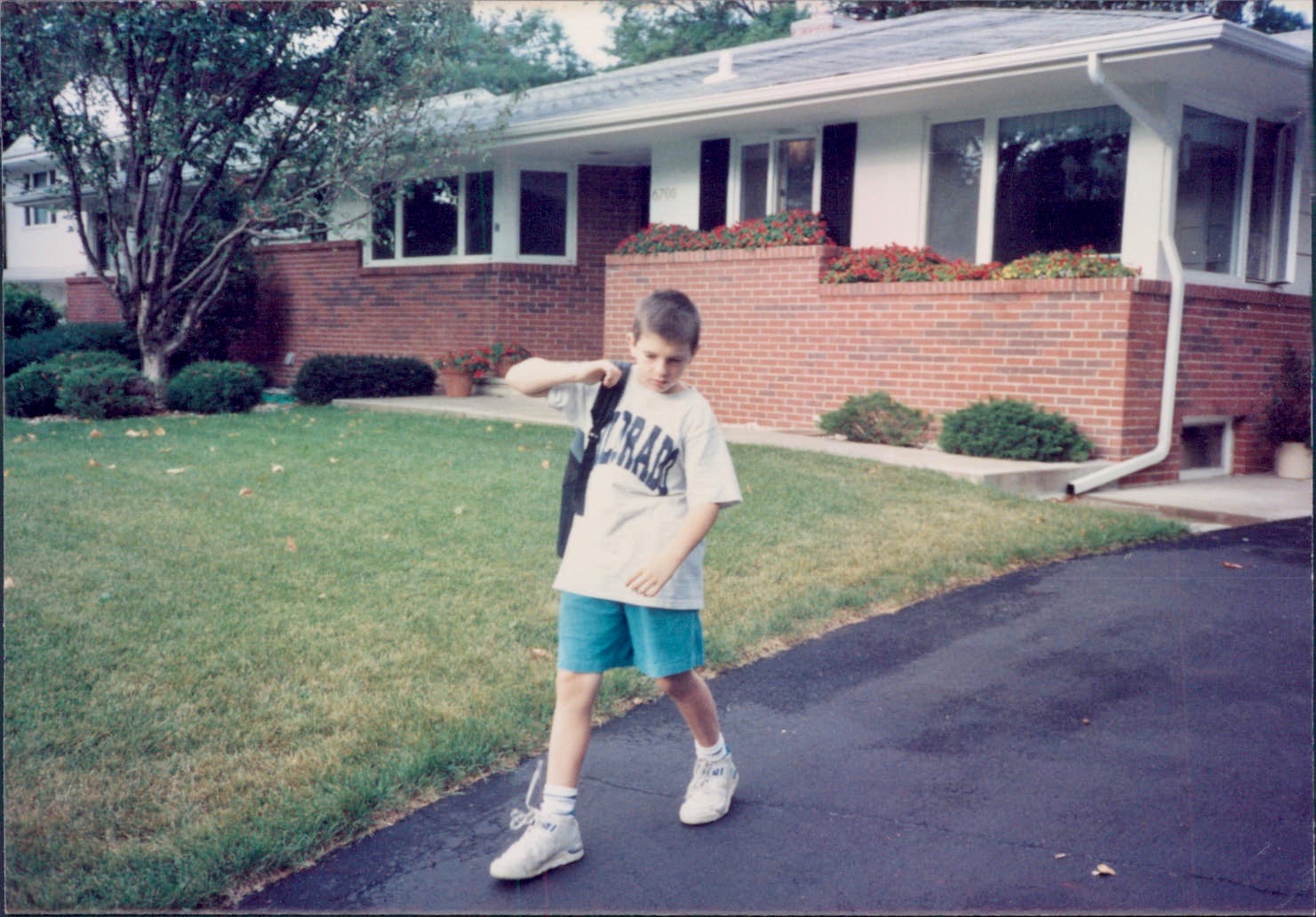 Duane’s dream for Christmas morning was seeing stacks of gifts under the tinseled glowing tree.  Every year we carefully planned weeks in advance what to give our kids.  One morning Duane spotted an ad in the newspaper.  A comic book collector was selling ten boxes filled with his pristine comic books for  $1000.

“A thousand dollars!”  Duane moaned.  He wanted to buy it.  Knew it was perfect for Jeffrey.  Every year we worked to make sure he didn’t feel deprived by his birthdate.

Duane came home with ten clean white file size cardboard boxes.  Each held one hundred comic books, each in a plastic sleeve.  I didn’t read comic books as a kid, but I was impressed.

“Where are we going to hide it?”

We buried it in Jeff’s bedroom closet, under sheets.

We couldn’t wait for Christmas.

In our Edina life, we opened presents Christmas morning at 6105 Abbott Avenue with my parents.  Dad and Mother came to our house on Christmas Eve, then brought our presents in bags to put under their tree.  Mother and Dad’s  tree, always a real one, was so small it made the pile of presents look more massive. 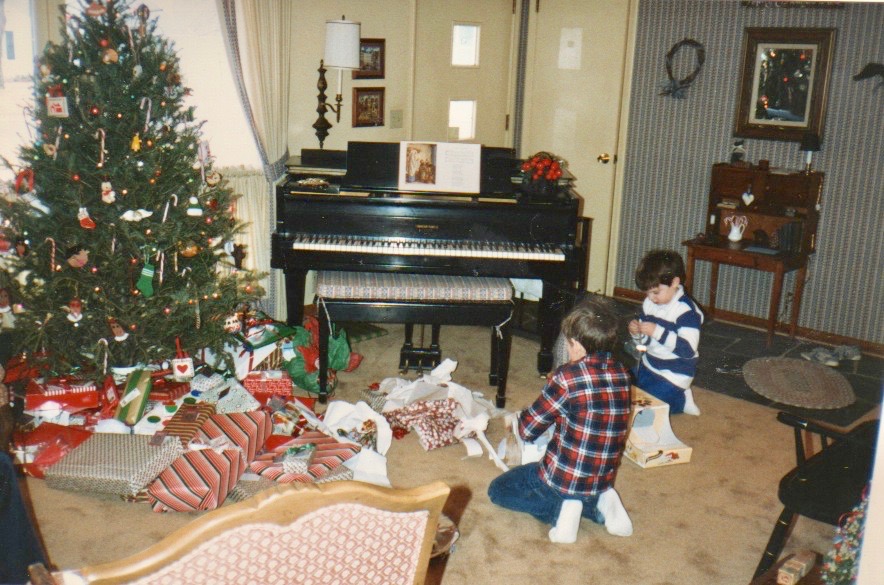 Mother was the queen of gift giving.  She taught me:

To combine those two is impossible.  Mother was a magician.  Most times, if we really want or like something, we’ve already bought it.  Mother’s style of gift giving eliminates our cursed culture’s habit of just going to the mall to ‘buy something.’  It also takes thought and love.  If you ever have someone ask you, “What gift do you want me to get for you?” – well, they are not holding up Mother’s Gold Standard.

When I was thirteen, on Christmas morning I opened a package with a tag scribbled ‘love Santa,’ which I knew was from Mother and Dad: a small tortoise shell case of blusher.  My first make up.  I was totally surprised.  I loved it.  And still remember it.

Amazingly, that Comic Book Christmas,  Jeffrey never looked through his closet.  We had just moved.  The house was a disaster for months, which may be the reason we got away with it.  For Christmas morning, Duane had wrapped up one of the 18 x 12 x 12 inch files of comic books and put it under the tree.

“Oh, wow!”  Jeff said, when he opened the present, and lifted the cardboard lid to find the neat but packed tight trove of comic books.

“They’re beautiful!”  He carefully pulled one, still in it’s plastic sleeve, from the box, to admire it.

Inside the box was a mysterious clue.  “There are more… but you have to find them…”   Duane had cooked up scavenger hunt clues that led Jeffrey, Mike close behind him, to his bedroom closet to find the rest of the treasure.

“What in the world?!  Dad, where did you get all these comics?!”  Jeff said when he found the remaining nine boxes.   He spent the next few years of his life carefully reading, sorting and arranging that comic collection.  Mike enjoyed them, too.

That was not a ‘Bataan Death March Christmas.’

Three years ago, Mother had a heart attack on December 19.  By Christmas Eve, she was not eating or drinking.  She wrote her sweet, “I love you all very much… and God loves you…” letter goodbye on the back of her menu at the rehabilitation facility a few days later.  She died December 30.  Mother was looking forward to seeing Jesus, but it was the first year Mother and Dad weren’t with us.  The Bataan Death March flitted through my thoughts.  A quiet loss circled opening presents that Christmas morning.

During the bombing of London, the English lived, “Keep Calm and Carry On.”  So, this November, when Duane and I became aware of a family crisis before leaving for a planned trip to England and France, we went anyway.  We wondered what kind of a trip it would be as we carried sadness along with our suitcases.  Christmas was on our minds as I like to shop in England for gifts because I see things I don’t see at Countryside Mall.  London lavished streets and shop windows with lights and festive decorations. 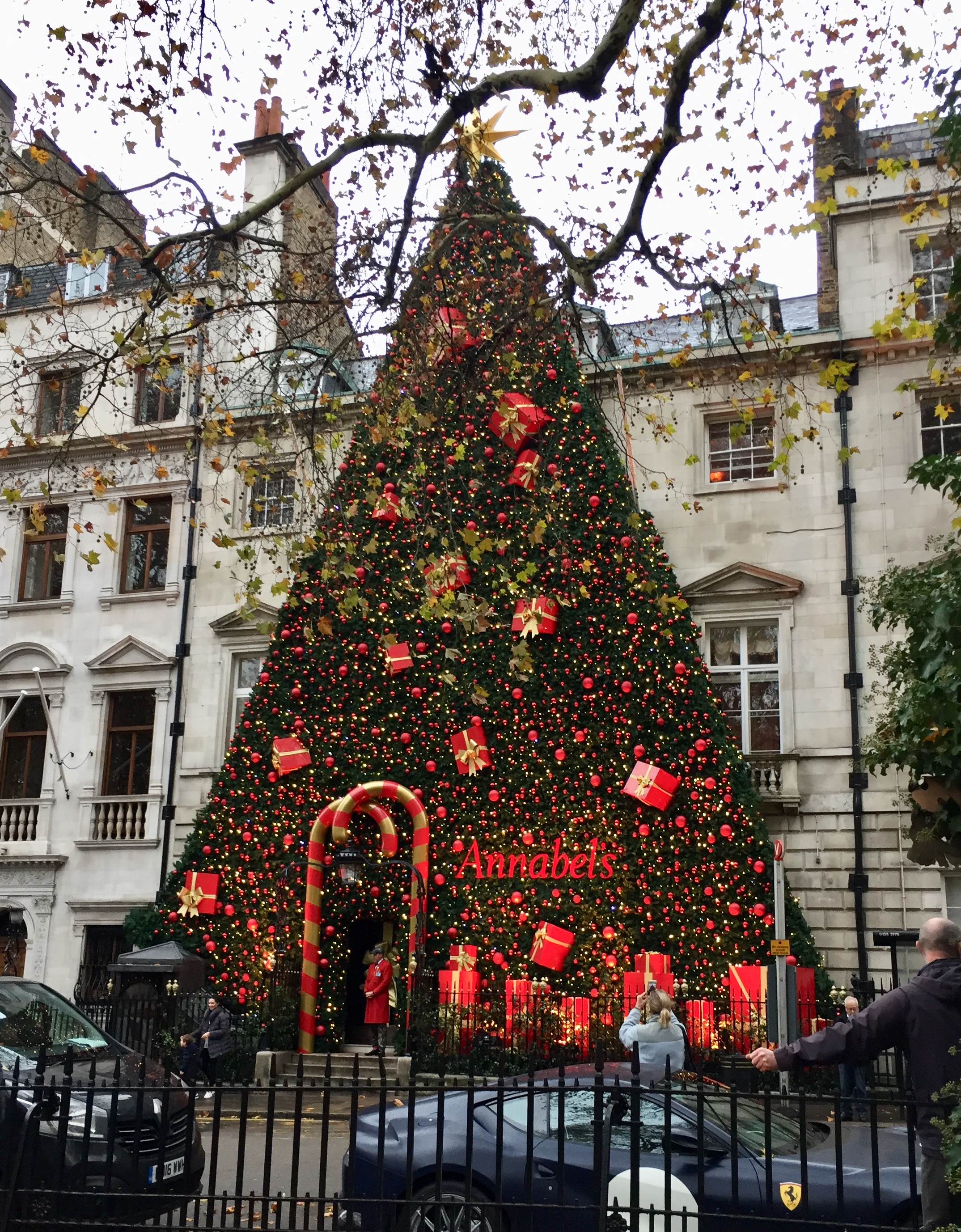 We walked London.  We had lots of time to talk and think about our ‘family situation’ – a euphemism for business that impacts me but isn’t my business to explain here.  How would our family celebrate this year?  TV ads and movies idolize family togetherness at Christmas.  Would that be our Christmas?

The first Sunday evening in London we had booked a concert of  Benjamin Britten’s “A Ceremony of Carols” at what we thought was a cathedral.  St. Stephen’s turned out to be an intimate, old church in Kensington.  We had purchased the ‘premium seats,’ which meant the front row, with a (very thin) cushion. 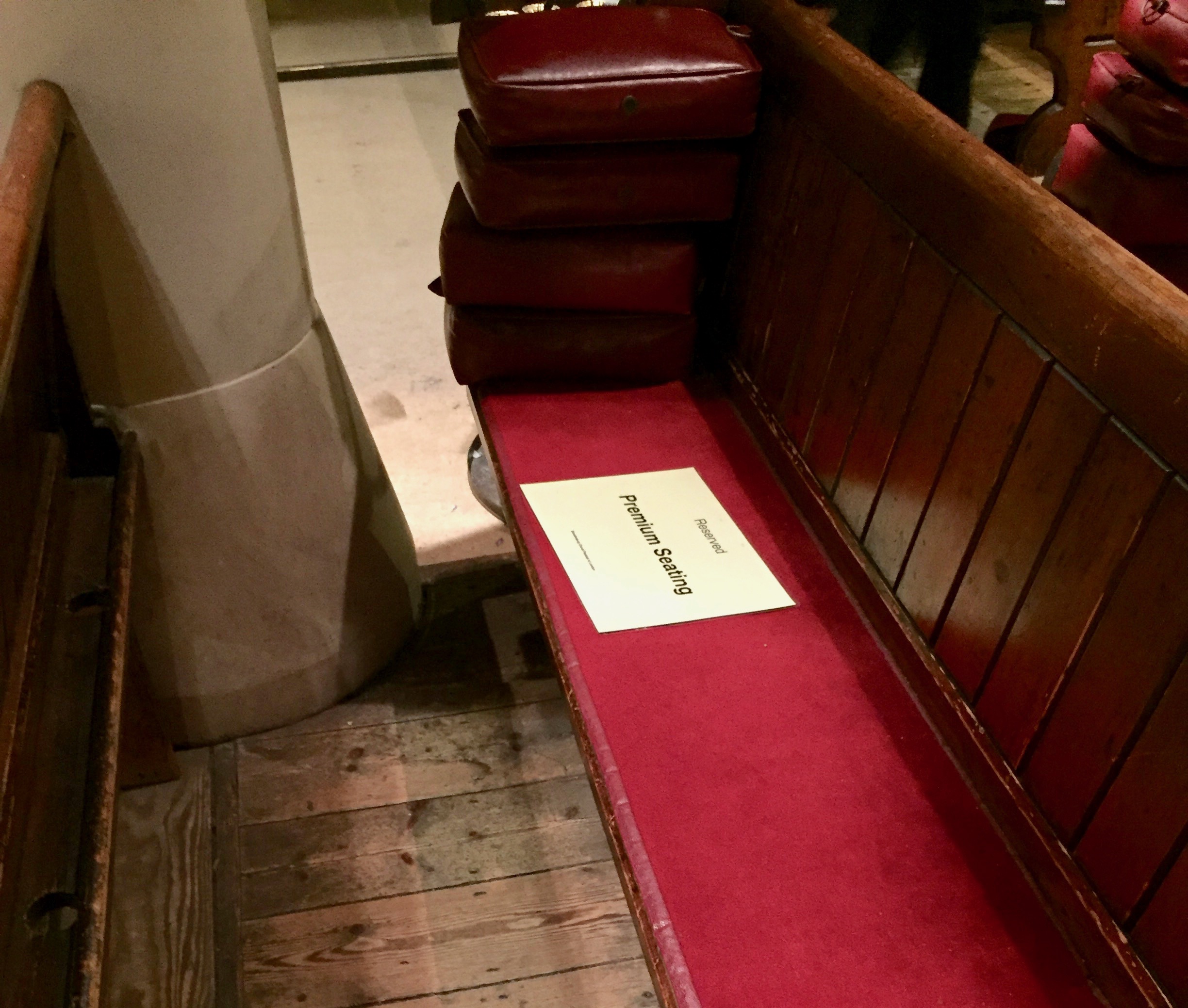 We even got a program included in the price, which had all the words to the pieces the Bromley Boy Singers were to perform.  I had chosen this concert because I had sung Britten’s ‘Carols’ when I was in a 9th grade madrigal group.  The young boys, in black pants and white shirts, filed into the nave and, intently watching their director, began singing when he lifted his hands.  The music as it bounced throughout the warm church lit up the words like fireworks. 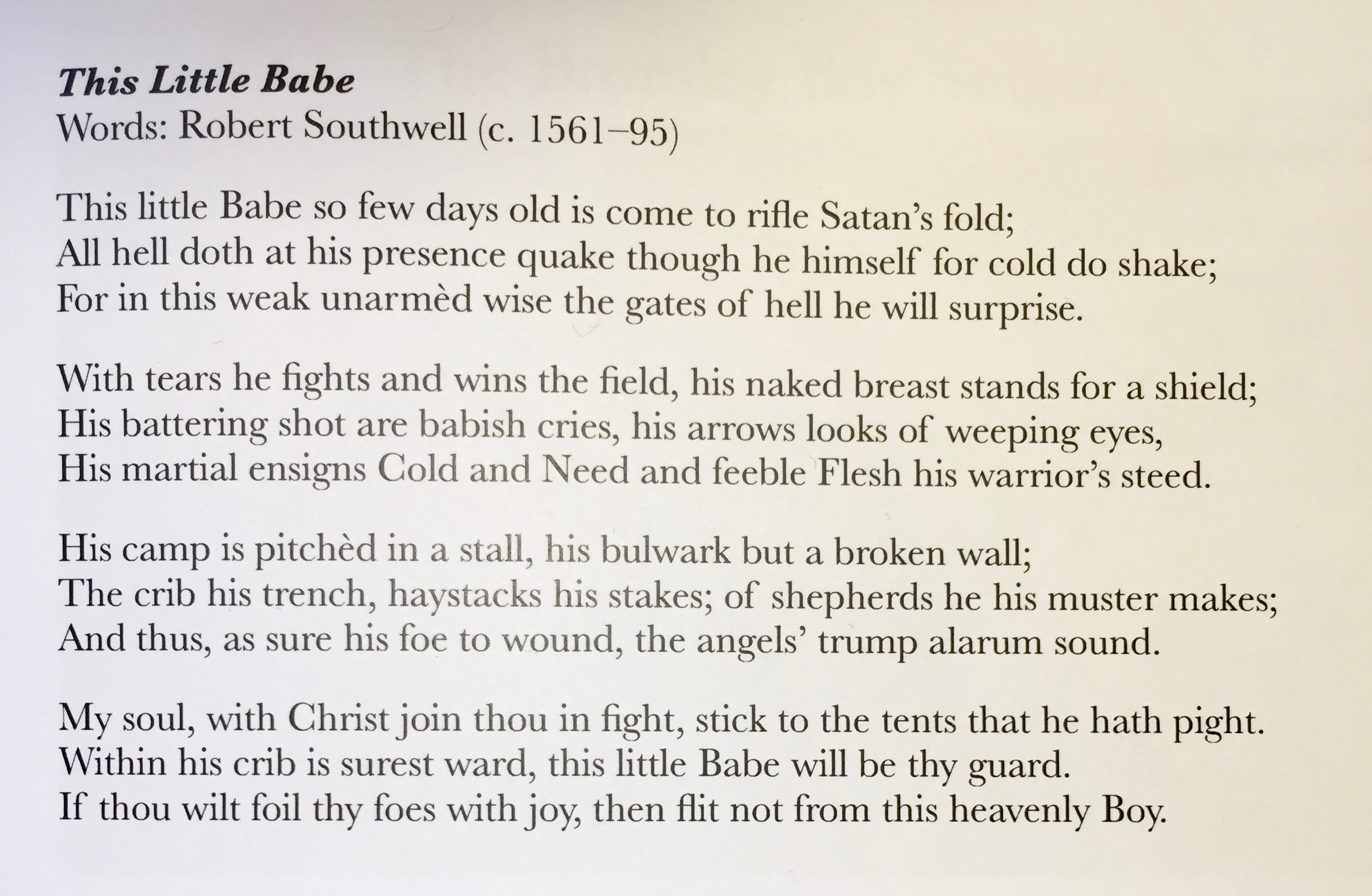 “A Ceremony of Carols” is made up of eleven short songs describing Christ’s birth.  The seventh song, words by poet Robert Southwell,  shook me awake from our cultures’ fantasies, into the reality of what I do believe.

Christmas is about “This little Babe…”

I wanted to learn about the gilded life of such a deeply Christian poet.  Southwell was English, yes, but educated in Rome.  Became a Jesuit priest, and returned to a Protestant England.  Not good for him.  Tortured ten different times. He languished in prison the last two years of his life.  At age 34, he was beheaded, drawn and quartered.  A Bataan Death March Christmas for him.

Eureka!  One of my Wheaton professors used to exclaim that when he discovered something brilliant.  Christmas is not about how many family members are in the room Christmas morning, or the state of my family, or my health or job or whatever burden I’m carrying.  It’s because of these troubles, our sometimes Bataan Death March life, that God sent his Son to earth. “Emmanuel.”  God with us.  His gift is like Mother’s gift giving:  just what we need and want and at the same time a wonderful surprise!

So, I’m buying gifts still for all those I love, and baking cookies, and putting up my Christmas tree.  (The truth is the trees were up before we left and everyone who knows us knows that.)   I’m thrilled this year that Jesus has come and is with our family and with me.  I found this felt creche in a Benedictine gift shop in Paris behind a Cathedral in Le Marais.

“… If thou wilt foil thy foes with joy, then flit not from this heavenly Boy.” 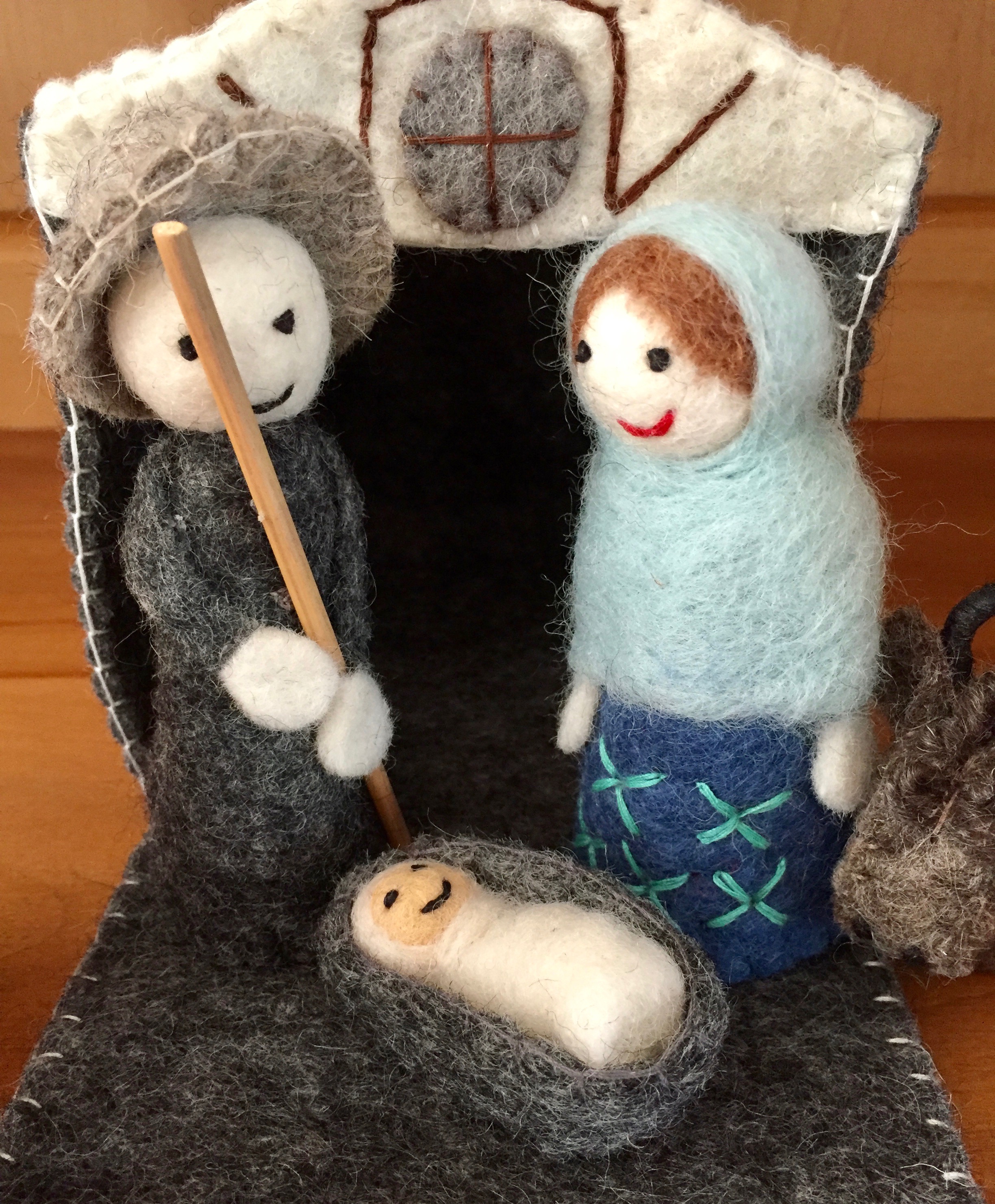