In Spain, every building had windows with Juliet balconies.  A Juliet balcony is a ‘half balcony’ outside a window, like the one where Juliet stood when Romeo wooed her from the ground. 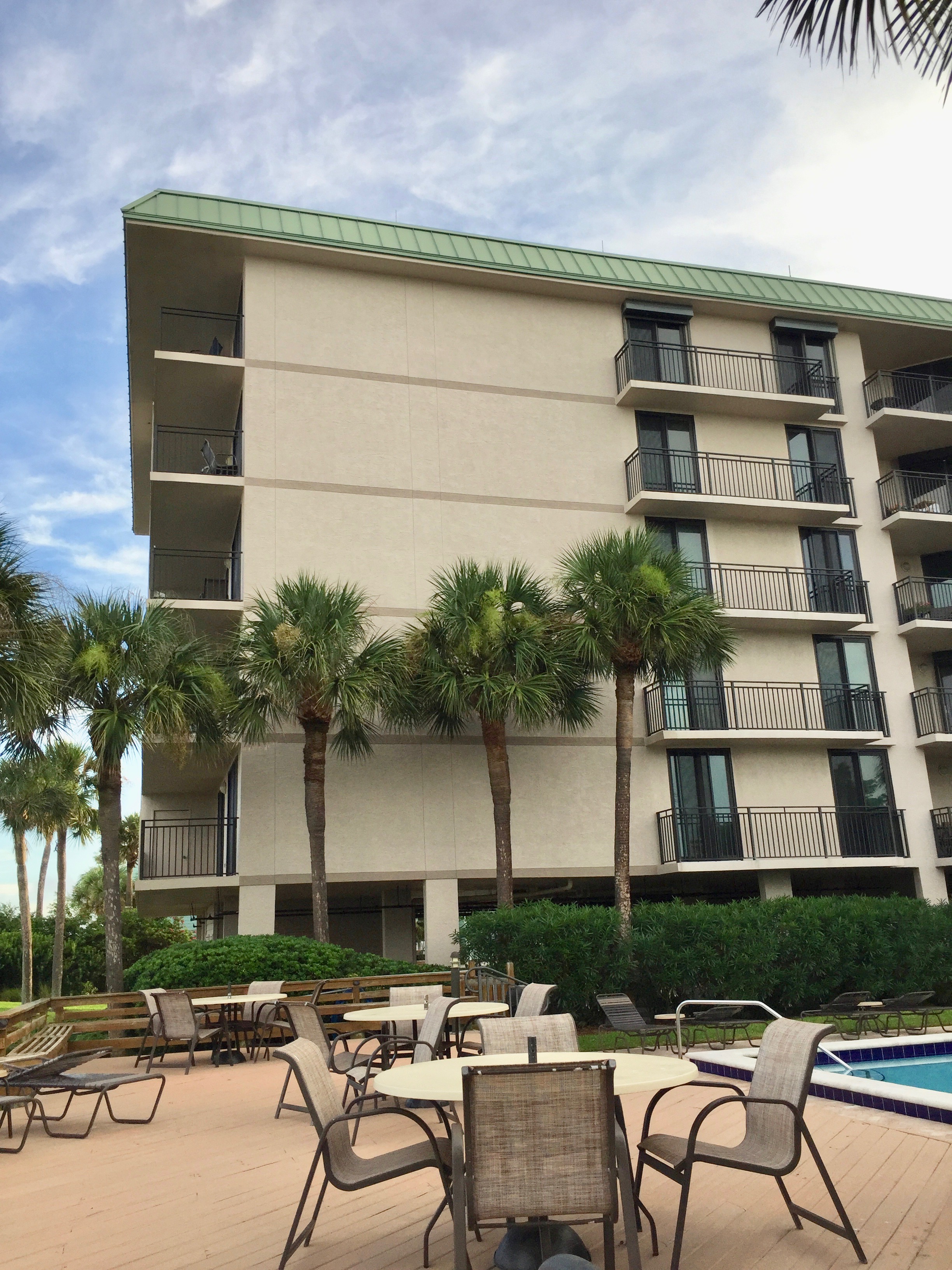 In April, before our May trip, we heard that our dream unit at Driftwood Sands was going to go on the market.  We owned a beautiful unit, but this one, on the top floor, directly faced the Gulf.   Two of the bedrooms overlooked the pool, with  Juliet balconies.

“Make an offer!”  our realtor friend enthusiastically prompted.  “Let the owner know you want it.  I know two other friends who are interested, too.  It won’t last.”

We’re shy.  Her advice sounded too pushy.  But we had seen inside 508.  A workman had invited us to peek in while he was making a repair.   We quickly walked through, as nervous as two undercover spies. 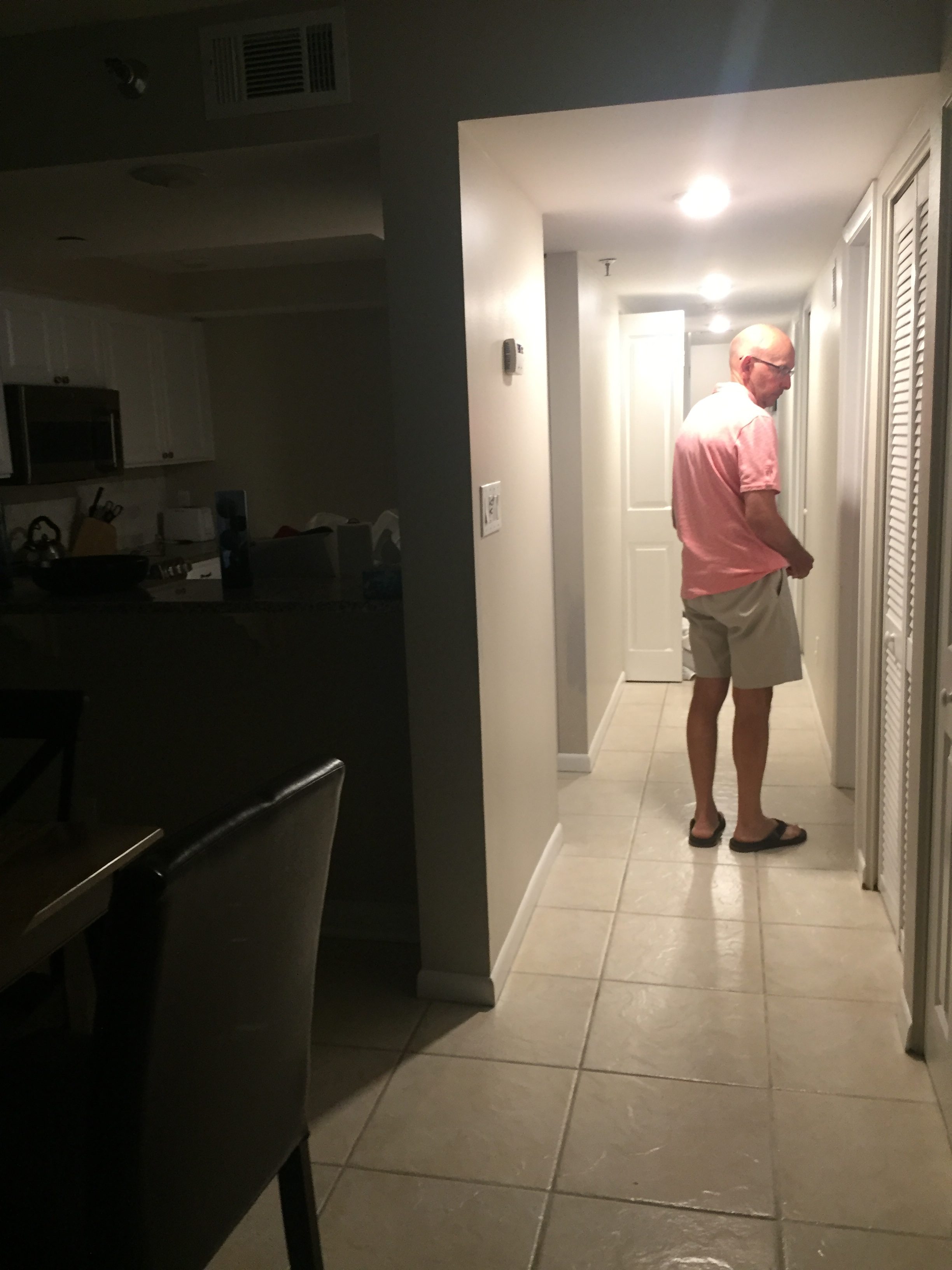 “It’s perfect for us,”  I answered.  I had ‘that’ feeling.   I had had it before when we had bought a house: a peaceful excitement that this would be perfect for us.  I wondered what Duane thought.

We try to specifically pray about every detail of life.  Especially houses.  It becomes a home.   Our place to talk, share dinners, watch old World War II movies, make and eat chocolate chip cookies, tell about our day, laugh, cry, and care for each other. 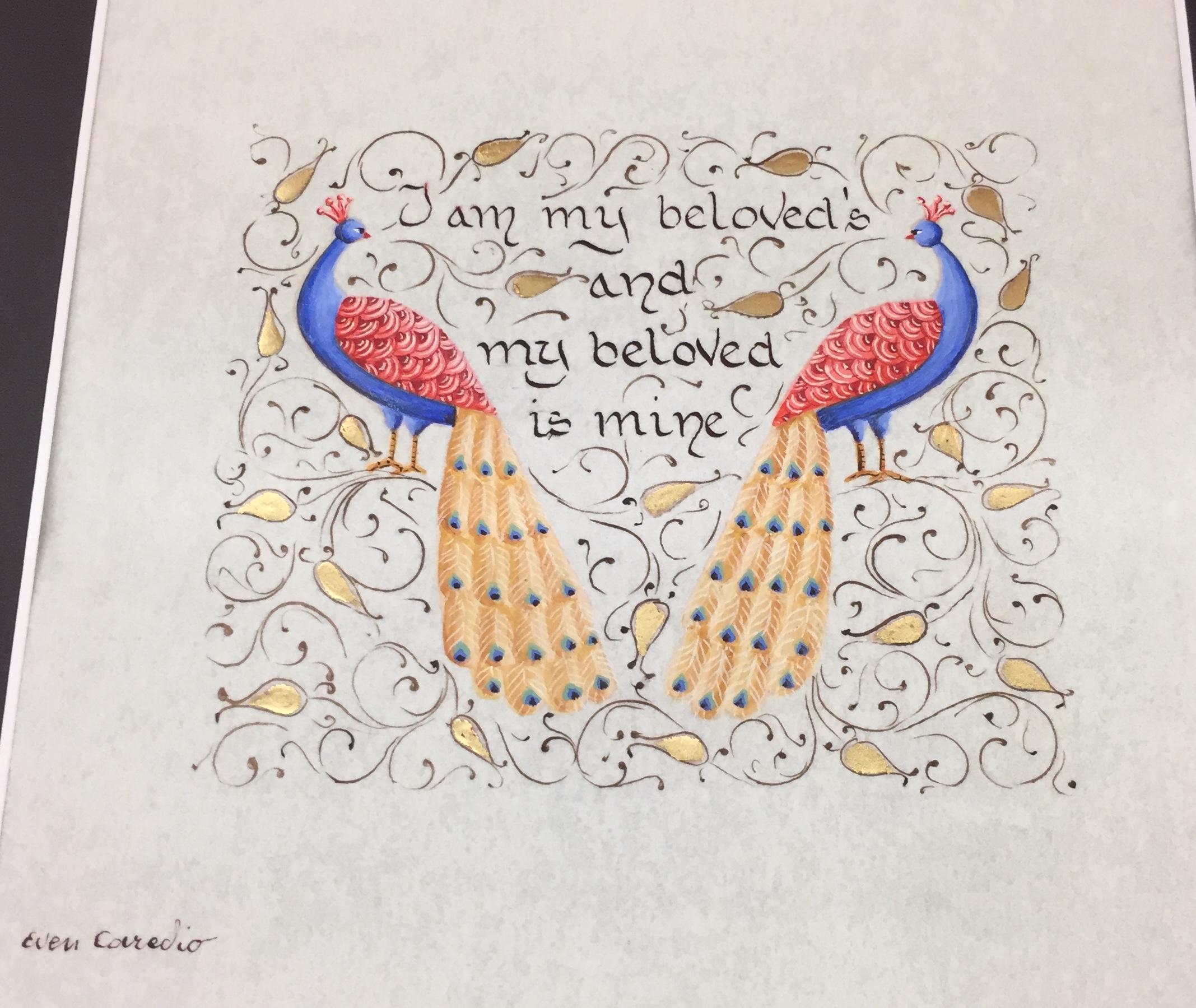 We also consider our home a place to share with our family and friends.  When house hunting, we look for a spot big enough for our extension dining room table, a living room big enough to host our small group, and a cozy guest bedroom.  Unit 508 made the cut.  We dug out the owner’s email address.

“Do you think this sounds right?”  Duane asked, reading aloud his carefully worded email regarding our interest in 508.   His finger hovered over the ‘send’ button.  Then he pushed it.

A week passed, with no response.  People are busy.  We kept praying about it.  Then Duane sent the same offer in a text.  A few more days went by.  We were going to Spain, leaving the country, in another week.

“I’m so disappointed,”  I said to Duane.  “When we both have that feeling, and keep praying, I think it’s what God has for us.”

“You’re talking to Kevin!?”  I whispered, while he was on the phone.  I was in shock.  Duane doesn’t like to bother anyone.

“Yes, we’re thinking about selling,”  Duane had put Kevin on speaker.  “I’ll get back to you.”

We were thrilled.  It wasn’t a rumor, after all.  Days and more days passed.

In 2017 we had bought and remodeled a condo at Driftwood Sands.  Our dream at that time was that this would be a weekend place for us, and our family.  Mike and Elizabeth bought it with us.  Jeff and Heather, in Jacksonville, weren’t too far away to come for weekends.  We imagined family times of fun there. 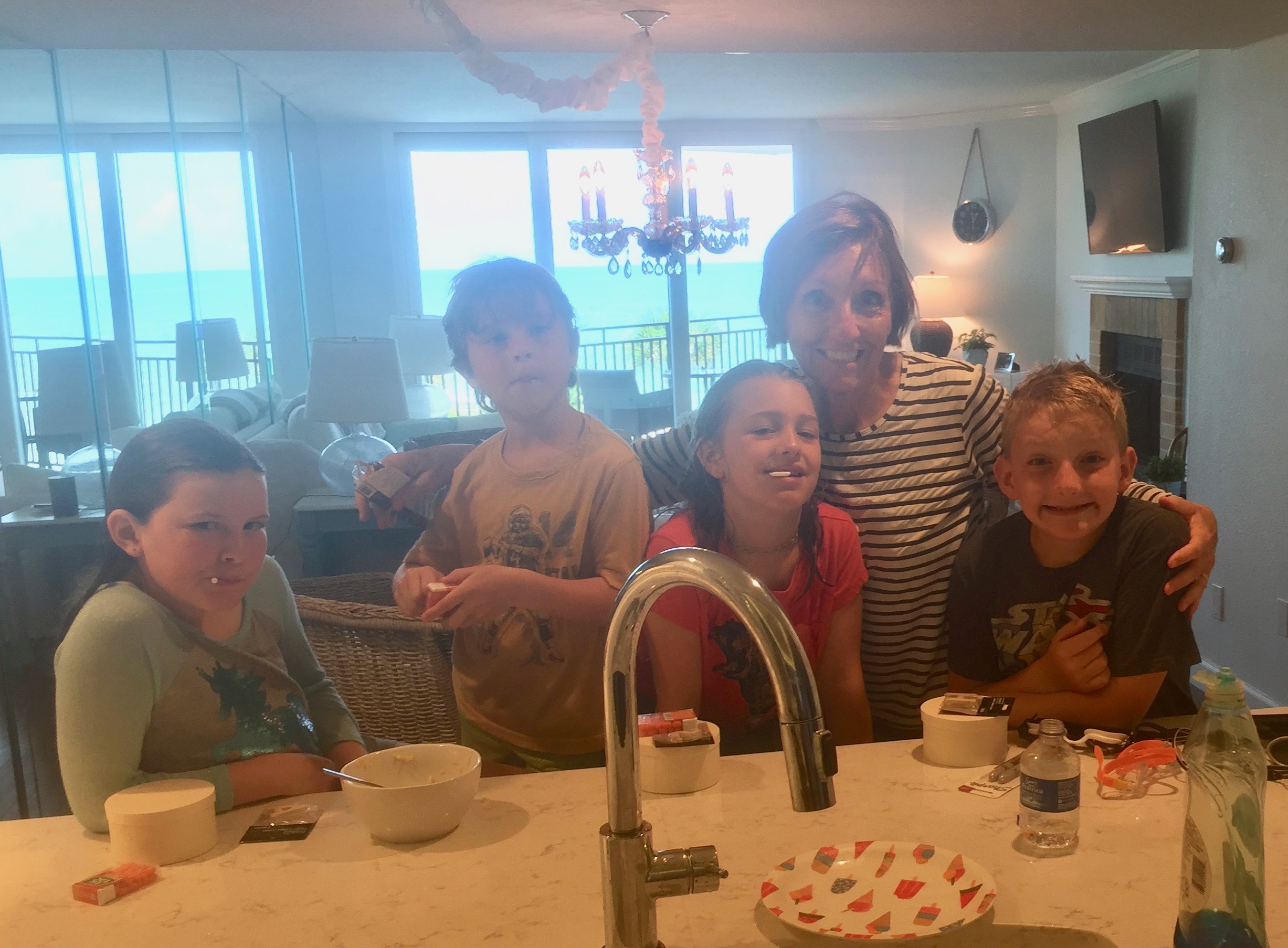 For the next two years, Duane and I enjoyed it mostly by ourselves.  Our kids and their kids had busy lives of their own.

Before April, with our plans for Spain all set, we decided it was time to downsize to one place.  Sell the house.  We didn’t want to care for a pool.  Or climb on ladders to trim bushes.  We owned more square feet than we needed.   We listed our house in Oldsmar for sale.

We left for Spain, wondering if we would be moving to 307, or 508 when we got home.   We liked 307, but we loved 508.  The floor plan would work better for us as full time residents.  The configuration of the master bedroom and bathroom was better.  The kitchen was bigger. 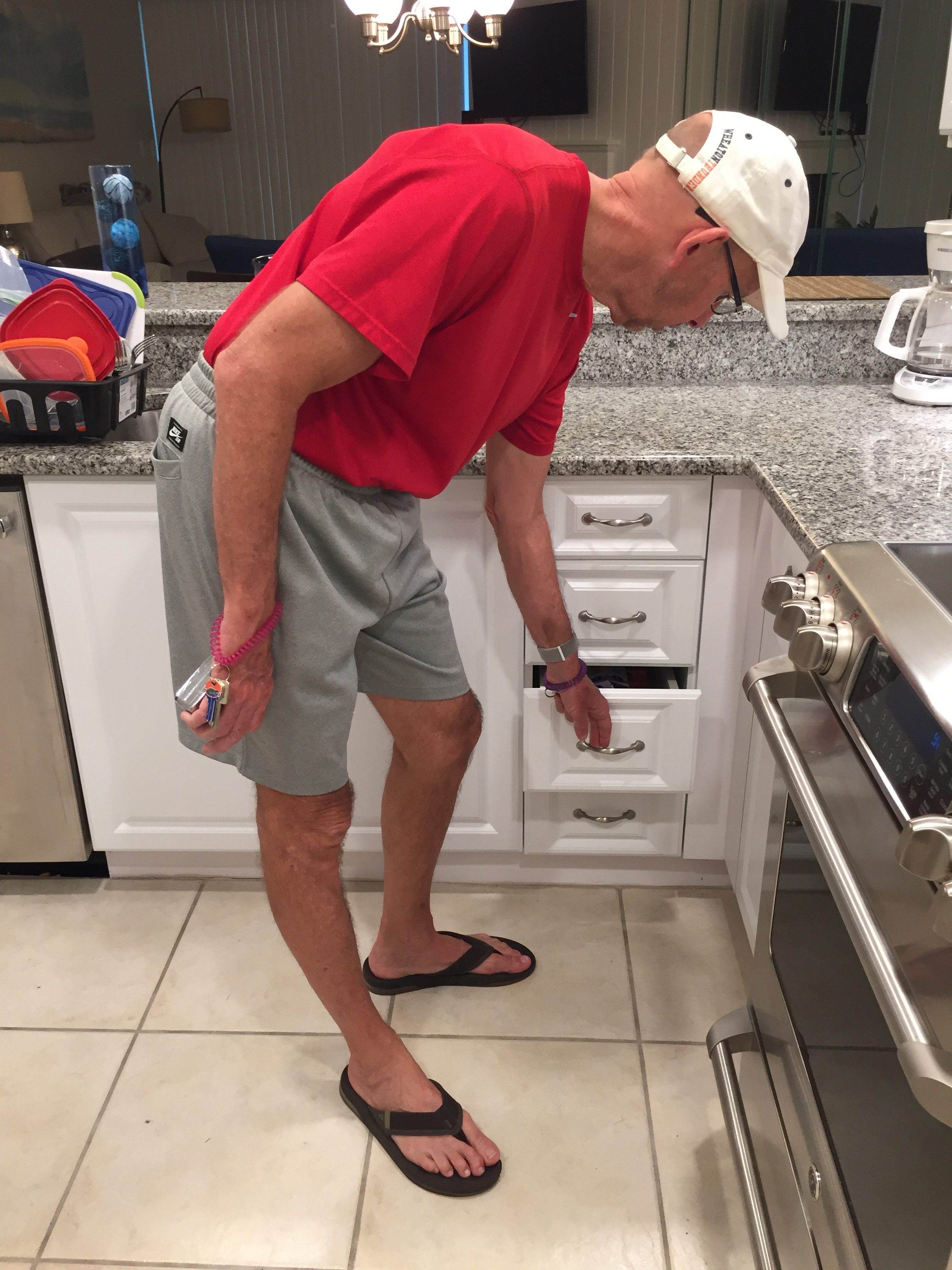 508 had more light.  I love the light that shines in windows. At the same amount of square feet as 307. 508 had bigger windows and a direct view of the Gulf of Mexico in the master bedroom. 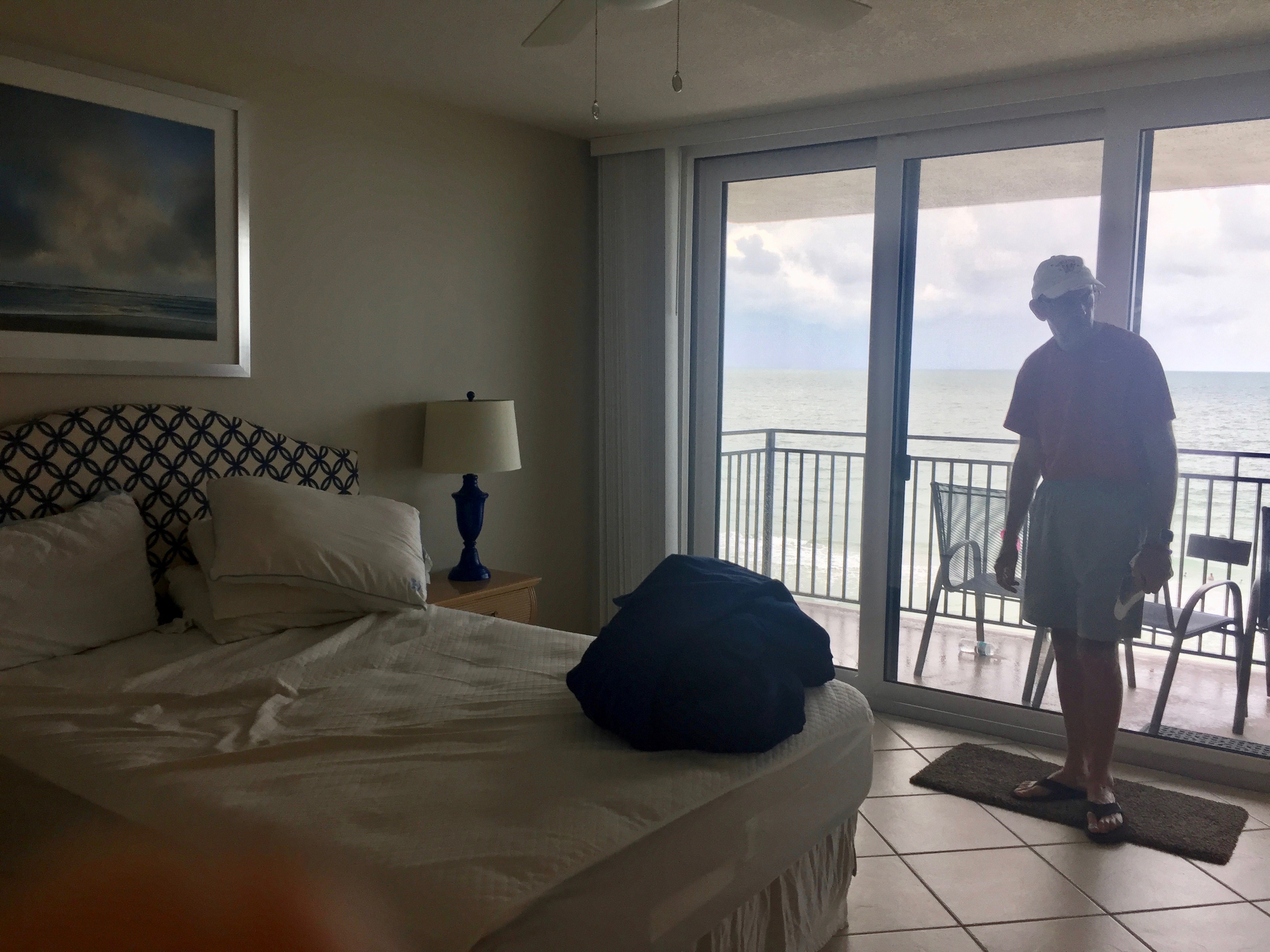 It was good to be in Spain in May.  I thought of 508, with it’s Juliet balconies, every time I saw one.  But Kevin hadn’t called back, so I figured we would be moving to 307 when we got home.  Except, Duane and I had both had that sense that God planned 508 for us.  Usually I start mentally arranging furniture and picking out wall colors before a move.  But without being sure of where we were going, I couldn’t dream. 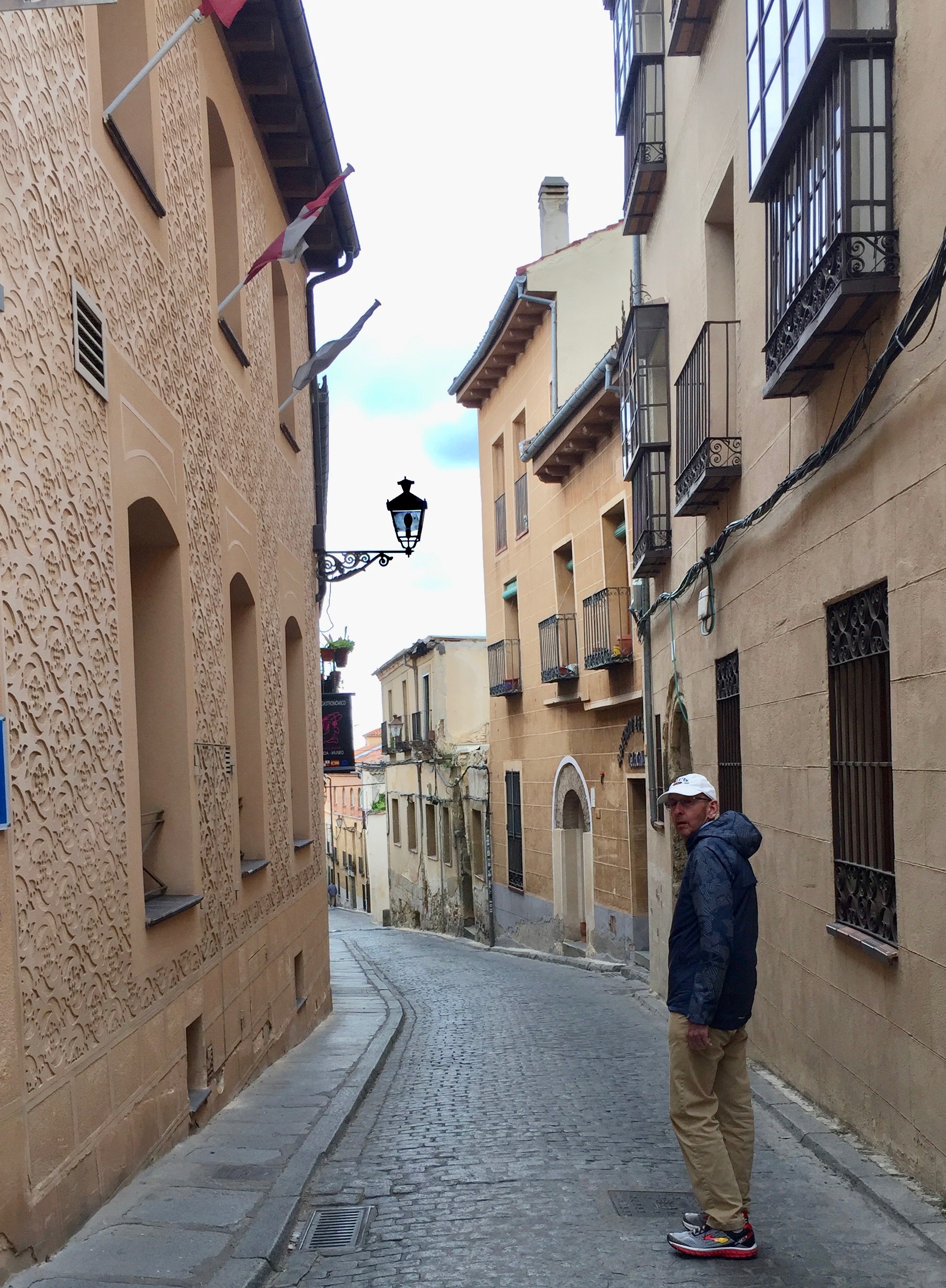 We continued to ask God where he wanted us to be.   When we arrived home at the end of May, we signed the papers on a contract to sell our house at the end of June.  That same week I overheard a Board meeting at our condo say,

Every day the dream of living in unit 508 drifted farther away.  Busy with packing and putting some things in storage, we kept getting ready to move to 307.  We began to plan how to make our beach condo our new home.   We made trips to IKEA to buy storage units so we could fit the items that sparked joy, thank you Marie Kondo, into 307.

It was just that 307 didn’t seem exactly right.  It was hard not to complain to God.

I read the verse, “Lead me in the right path, O LORD, or my enemies will conquer me.  Make your way plain for me to follow.”  (Psalm 5:8)  In the past, when we had moved, I was so excited for our next place, all my thoughts were focused on how I was going to nest in the new digs.  Moving was fun.  Now I wondered if we were doing the right thing.  Or maybe our timing was off.  Maybe God wanted us to wait to move until we knew we could buy 508.

“Maybe the buyers will back out of our house contract,”  I reasoned, “Then that will be a sign from God that we shouldn’t sell our house and move to 307.”

But the house passed inspection.  The house appraised at the right price.  The process for the house sale moved continuously forward as steadily as the minutes on a clock .  God kept pushing us into 307.  Packing continued as each day and week passed.  I kept my Bitty Baby doll, because even when my granddaughters don’t play with her, she brings me joy. 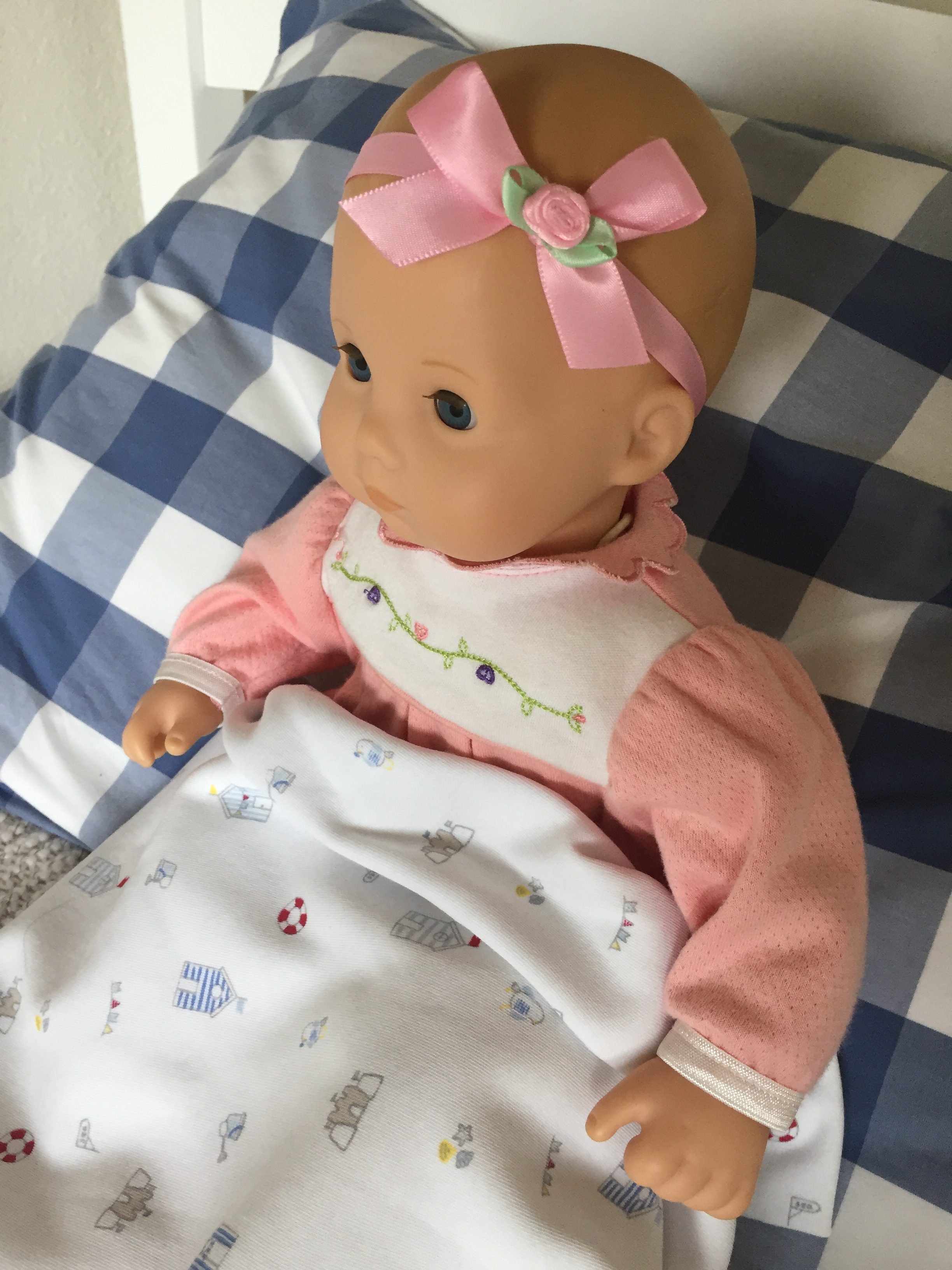 Then one Sunday morning I woke up to see Duane, beside me,  listening to a message on his iPhone.

“What’s that?”  I asked with my head still on the pillow.

We met Kevin and Amy at 508 that afternoon, and by Monday night had signed a contract to close on the unit August 1. 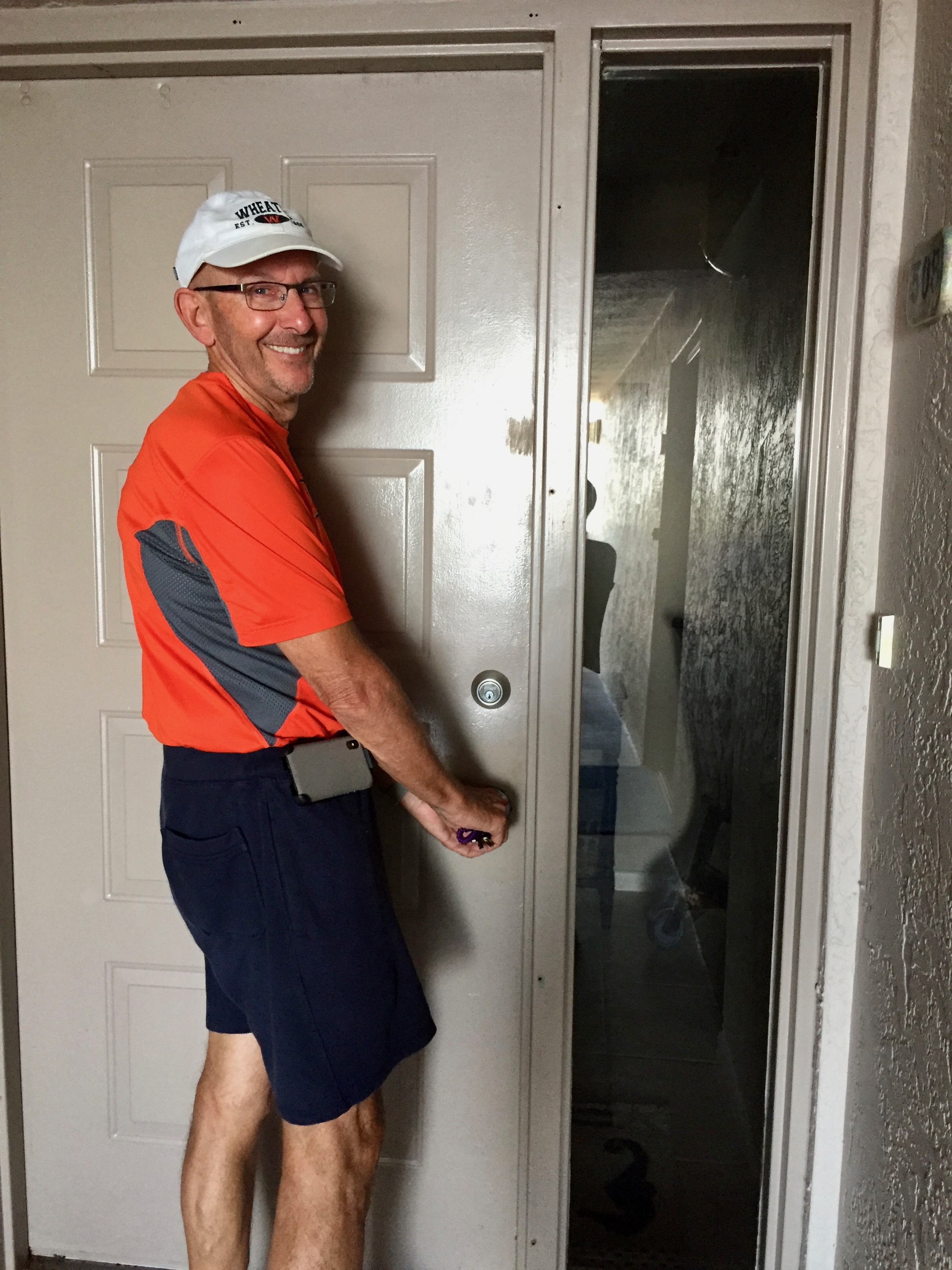 Yesterday Duane and I walked into our new adventure.  We’re both excited.  We’re thinking about new flooring, and I’m considering which white to paint the walls.

“What’s the difference?”  Duane teases.  He knows the truth.  There are a gazillion whites and then there’s different brands of paint with varying amounts of pigments to choose.  So many decisions.

How to make the right one?  Pray and plan, plan and pray.   In one of mother’s notebooks she had written Psalm 16:3, “Commit your actions to the LORD, and your plans will succeed.”  Caveat:  There’s a line in the movie “Gone With The Wind” that comes to mind at times when I ask God for something.  Mammy, with down to earth wisdom, harrumphs to one of Scarlett’s numerous selfish desires, “Askin’ ain’t gettin’!”  Often God does say no.  Or wait.  Or yes.  God’s mysterious at times.  Looking back, a year from now, we’ll better understand why he’s placed us in 508.

After weeks that turned into several months of confusion and doubts, the path ahead seems… filled with more praying and planning.  Our new condo is top floor closest to the beach on the right side. The fainter rainbow in the picture points onto our bedroom. 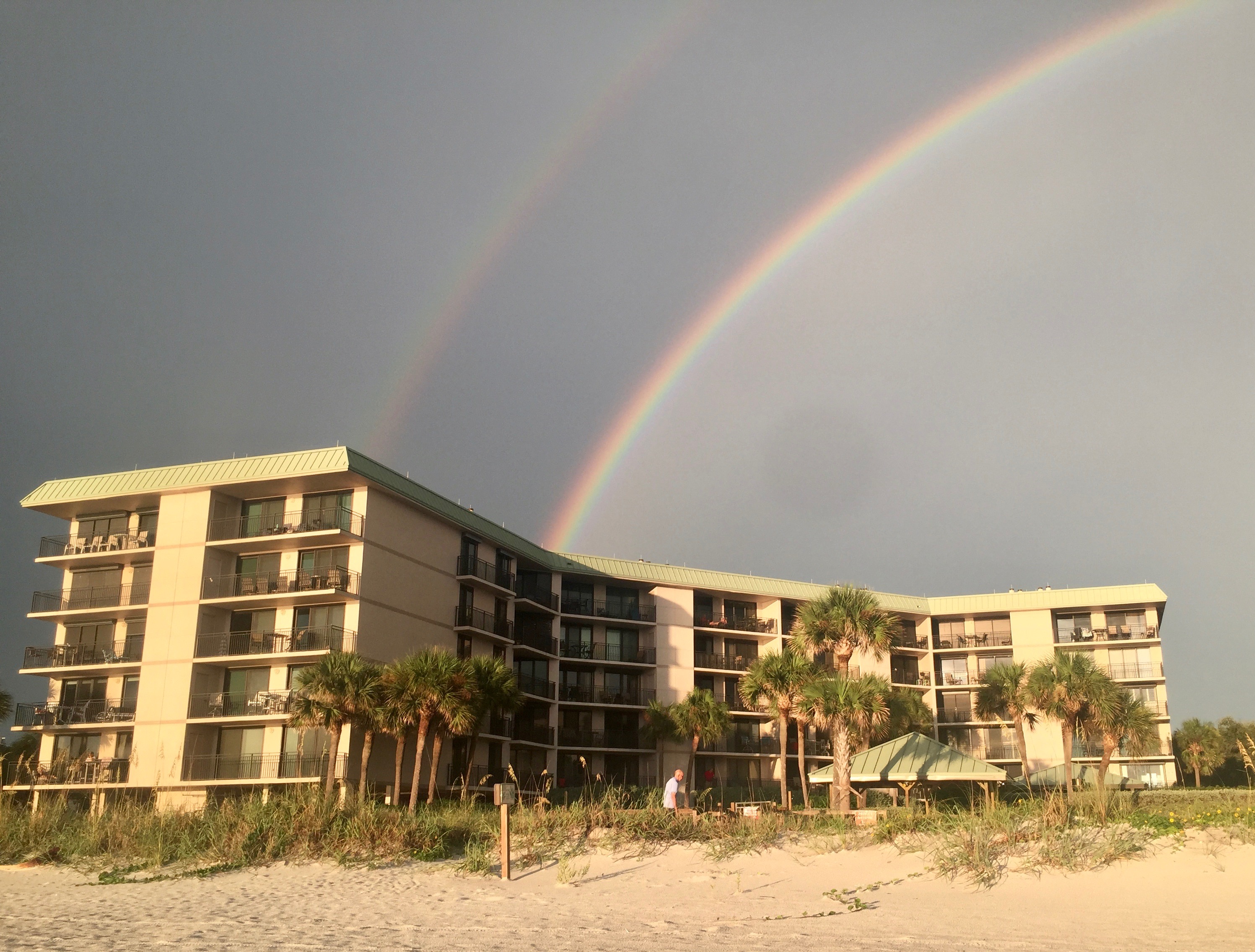