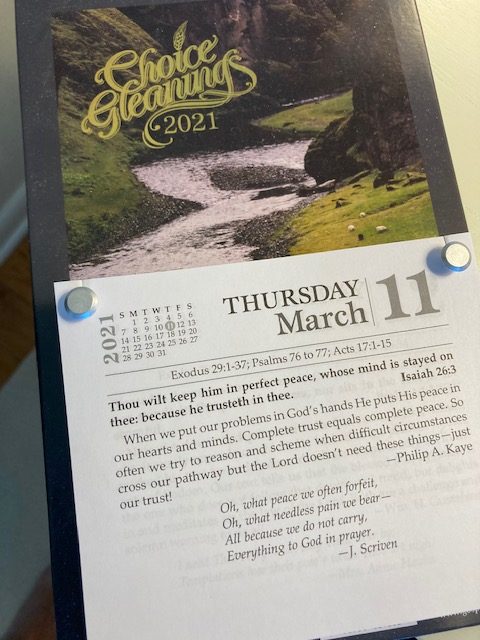 Every Christmas my Mother gave each of her daughters a “Choice Gleanings” devotional calendar. I still buy myself one every year, now that she’s in heaven with Jesus.

From January 27: “And I will give you the treasures of darkness, and hidden riches of secret places.” Isaiah 45:3 and “For you will light my candle: the LORD my God will enlighten my darkness.” Psalm 18:28 the note added, “… so do not fear dark places child of God, His presence will lighten your darkness and give you strength to go on.” another verse I have meditated on over the years , “When I sit in darkness, the LORD will be a light to me.” Micah 7:8.

Those words resonate with me after knee replacement surgery twelve weeks ago.

My knee is healing quite nicely. Duane and i have been biking with our red recumbent tandem since week four post surgery. I’m walking well although can’t do more than a mile. I’m back at yoga classes.

But after the surgery, what I thought was a mild anxiety disorder ballooned, with help from worry about pain, about not doing enough to heal properly and having some drug reactions that caused me to lose my appetite and ten pounds.

I’d wake up at 5 in the morning, sweating, jittery and crying to Duane for help.

Thankfully, I had a supportive doctor who I was able to get in to see. She did tests and said my health looked fine. I also called my therapist who I had seen in the past for direction and help with travel anxiety. She’s a Christian, and knows I’m a Christian, so when I told her, in tears, that I was worried I was going to hell, she could see I needed medical help.

“Jill, I’ve never seen you like this before,” she said. “I want you to see a psychiatrist to get your medications sorted out.”

The psychiatrist told me that one of the medications I had been taking for years for restless legs, and anxiety, had outlived its’ usefulness, and was the source of much of my problem, when it had combined with other knee medicines. It was time to wean off it.

One question my therapist asked, amid all the anxiety, was: “Do I feel safe?”

It’s a good question. I believe what I don’t feel safe about right now is my body. My knee is healing nicely, very well, and yet I still am limited in how much I walk and what I can do. I still remember the pressure the physical therapists put on me to “do everything right or you will not have a good outcome…”

Cutting back on the restless leg medicine solved the morning hysterics. Then as I cut back more, I began having hot flashes and jitteriness during the day or night, every day. It felt like my body was working against me with those general uncomfortable symptoms that some days had me laid out on the sofa. The psychiatrist gave me medicine to take the edge off, but the awareness of being on the cusp of an episode day after day is exhausting.

I was used to having a healthy body, but since December 10, when I had the surgery, I was fighting different body battles each week.

I grew up in a family where physical weakness was “poo poo-ed.”

“You’re healthy stock,” my father would say. He played tennis every day until he was 82. My mother walked daily with a friend. Neither was rarely sick. My mother developed Parkinson’s disease mildly at 65 which didn’t affect her daily life until her late 70’s.

Only in the last 2 years of his life did my father suffer with congestive heart failure, which caused him to lose so much weight he looked like a survivor of a concentration camp. That was when he and my mother had moved here to Clearwater, where my two sisters lived.

Some days we’d walk into their apartment at Regency Oaks and Dad would be sitting up at their small kitchen table eating his cereal, feeling fine. One day I walked in and he was sitting in his recliner, not feeling well at all. He often asked, “When do you think I’m going to go to the doctor and start feeling better?” He was a Dale Carnegie positive thinker. My unspoken response was, sadly, “Dad, you’re not going to be getting better.”

The day that hurt me the most was the day he said, “Just take me out and shoot me.” So unlike my Dad; he rarely complained but I knew the CHF was miserable.

Then the next time I visited, he was sitting in his recliner watching tennis on TV and he turned and said, “We’ll remember these days as the good times.” In my heart my response was, “Oh Dad, you have to be kidding, this is awful seeing you declining and suffering.” Now I laugh to myself that actually he was right: we enjoyed many good times with them in those last years, in spite of his health.

I’m thinking about my dad’s health because I think I’m too thin right now, like him. My appetite is coming back, but with drug withdrawal symptoms I’m not always hungry to eat, but know I should. Then I worry that the stress of being too thin and anxiety is hard on my heart. Duane checked that and it’s fine. 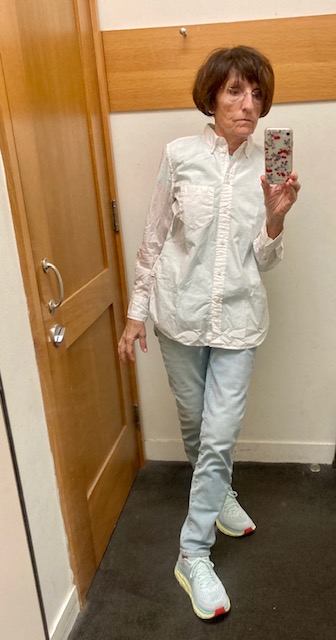 In my frustration and impatience with healing from surgery and overcoming medicine issues, my therapist suggested that maybe God has this time for me to slow down, wait, and work on relaxing.

“You need to adjust your expectations,” she said. “Give yourself six months to heal.” She suggested the “Calm” app when I was feeling anxious. Also, I began setting the iPad beside my bed so I could listen to hymns when I woke in the morning. Duane and I continue to take a walk after supper to listen to a Psalm and pray.

“Get a massage,” was another idea of the therapist, which was a new activity for me.

And Duane has been gently keeping me doing/going while also saying, “I understand.” I love him so much.

My morning devotional thought from March 5 was, “…He gives more of Himself to one person than to all the governments, politics, programs and opinions of this world. So dear believer, take courage and trust your loving Savior to get you through whatever you are facing today. You are a much loved child. Believe it.”

The blind hymn writer Fanny Crosby penned the lyric that followed, “…. Safe in the arms of Jesus, safe on His gentle breast. There by His love o’ershaded, sweetly my soul doth rest.” 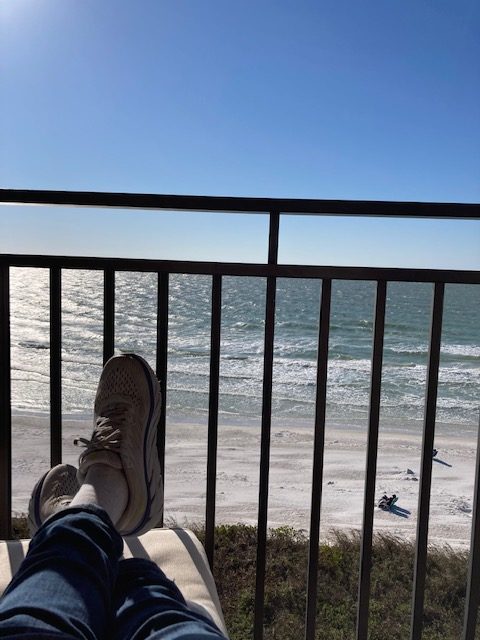