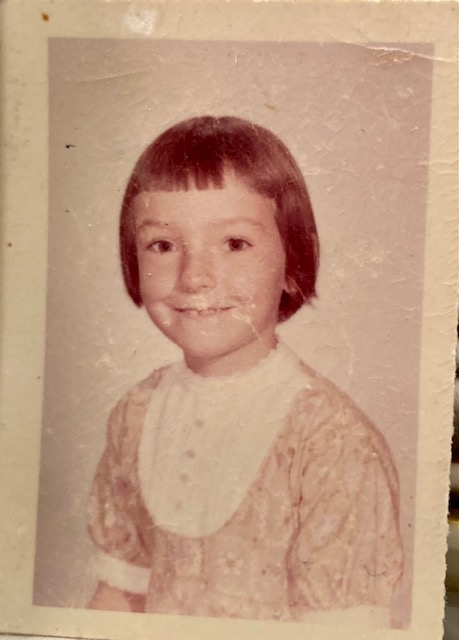 “Time to pull out the winter coats,”  Mother said as she rummaged in the front closet before school one Friday morning. “Jill, here’s your coat.”

“That’s Wendy’s coat!” Jill exclaimed.   She stared at what she would have to wear all winter.  It looked like a boy’s coat:  straight and plain.  Embroidered on each shoulder was a white anchor trimmed in red.

“It’s too small for Wendy,”  Mother corrected.  She took it off the metal hanger.

Being the middle sister,  Jill was used to hand me downs.

“You’ll look sharp!” That was Mother and Dad’s commonly used adjective for someone who looks their very best.  Mother’s fingers unbuttoned the front.  “Here, try it on.”

Jill slipped her arms into the sleeves.  She turned towards Mother.

“The sleeves look right,”  Mother said, running her hands along their length.  “Button it up.  Now go look at yourself in the mirror.”

Jill obeyed.  A large rectangular mirror hung on the wall between the living and dining room.

She studied her reflection.  The pixie haircut didn’t seem right with such a formal coat.  She wasn’t sure how she looked.  “I guess I like it.”

Jill smiled at herself.  She turned her head to inspect the sea themed trim on the shoulders.  Maybe hand me downs weren’t so bad after all.

“That’s why I got it out,”  Mother answered.  “You’ll need it on a cold morning like this.”

Jill ran into the kitchen to grab her lunch box, then out the front door.  The screen door banged shut as she skipped down the front steps.  It was easy to get to school when it was right across the street.  The safety patrol sixth grader stationed in their driveway held up her arms in front of a group of students waiting to cross Silver Avenue.

After several cars and an orange school bus passed, she said, “Go ahead.”

They all ran across the street.

Jill passed the monkey bars, slide and merry go round on her left.  She marched onward, across asphalt painted with  yellow hopscotch lines.  She wanted to get inside before the school bell rang.

The crisp fall air made her nose cold.  But she was warm in her new coat.  She swung her arms and puffed out clouds of frosty air.

Jill pulled open the heavy school door.  One instant later she was sucked into the hallway along with jostling students wearing their sweaters and jackets for the first time.  Overlook, with its’ own special scent of paste, floor cleaners and mimeograph ink , was like a second home.  She passed neat bulletin boards of construction paper displays.   Mrs. Reinhardts’ first grade class was the farthest down the hall.

“Hi, Jill,”  Peggy greeted, as she entered her room.  The cloakroom was on the other side of all the desks.  She walked towards it.

“Oh, Jill, you have a new coat,”  Arthur noticed, as she passed his desk.  He was the smartest and the smallest boy in the class. He got up and followed her.

The cloakroom was full of kids hanging up their winter garb.

It was a different coat than the other girls wore.  Or the boys.  No one had a coat like that one.

The kids stared at her new coat, with the bright brass buttons and red and white trim.  They didn’t always know what to expect from Jill.  She was the first girl they knew who chased the boys on the playground at recess and kissed them.  She could catch all of them, except George.  A television screen with knobs on the side was painted on her lunchbox.  In the cafeteria, when she was finished with her peanut butter and jelly sandwich, she pretended to watch cartoons on it.

“It’s a Navy coat,”  Jill blurted out.  She wasn’t sure, herself, where the idea came from.

“Not on the weekends,”  Jill insisted.  “I go on Saturday and Sunday.”

No one could disagree with that.  They didn’t know where  Jill went on the weekends.  And the dark blue coat with shining buttons looked like a real uniform.  She must be telling the truth.

“Class, time to get in our seats,”  Mrs. Reinhardt called.

Everyone whispered about the coat as they walked to their desks.

When it was time to go home, Jill’s friends followed her into the coatroom.  They watched as she lifted her Navy coat off its’ hook.    Jill reached her arms into each sleeve and pulled the coat around her  dress, feeling the thick wool fabric against her fingers.  The hand me down rated a new respect from her classmates.

“Have a good time with the Navy,”  they said.

“I’ll tell you about it on Monday,”  Jill waved and laughed as she walked out the door, towards home.

*credit for the wording of this moral to Dale Mace